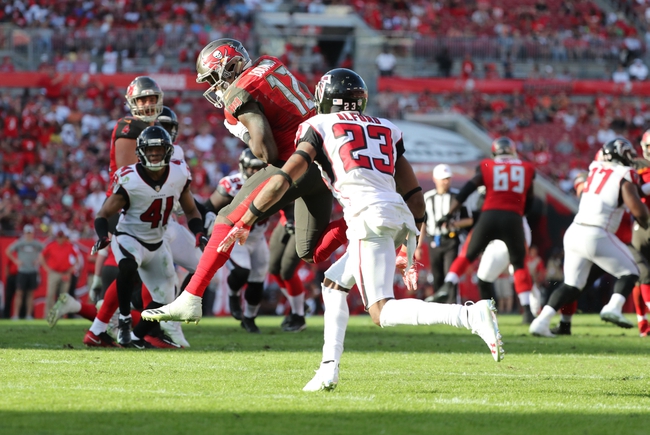 The Atlanta Falcons look for a third straight victory to keep their slim playoff hopes alive. The Atlanta Falcons have lost their last three home games. Matt Ryan is completing 69.2 percent of his passes for 2,663 yards, 18 touchdowns and nine interceptions. Ryan has two or more touchdown passes in six of his last nine games. Julio Jones and Calvin Ridley have combined for 1,596 receiving yards and nine touchdowns while Austin Hooper has 56 receptions. The Atlanta Falcons ground game is averaging 74.5 yards per contest, and Devonta Freeman leads the way with 371 yards on 107 carries. Defensively, Atlanta is allowing 26.2 points and 369.3 yards per game. De’Vondre Campbell leads the Atlanta Falcons with 88 tackles, Grady Jarrett has 5.5 sacks and Desmond Trufant has three interceptions.

The Tampa Bay Buccaneers are 3-3-1 ATS in their last seven games as a road underdog. The Atlanta Falcons are 2-6 ATS in their last eight games as a home favorite. The Tampa Bay Buccaneers continue to play sloppy football with a defense that can't get off the field and an offense that turns the ball over constantly. The Atlanta Falcons are playing their best ball of the season with two straight wins and the defense has allowed a combined 12 points. These are the Falcons I expected to see from the start. While it's probably too little too late, the Falcons should cruise in this game as well.