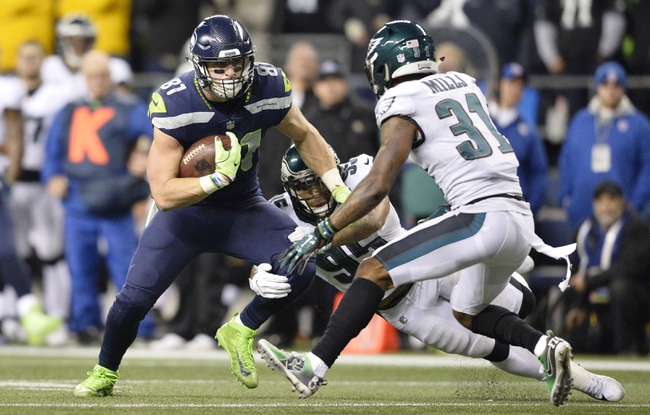 The Seattle Seahawks and the Philadelphia Eagles meet in a week 12 NFL matchup from Lincoln Financial Field on Sunday afternoon.

The Seattle Seahawks will look to build on their three game win streak and victories in 6 of their last 7 games after a 27-24 win over San Francisco, ending the 49ers’ unbeaten run before going into their bye week. Russell Wilson has thrown for 2,737 yards, 23 touchdowns and 2 interceptions on 68.5% passing while Chris Carson leads Seattle in rushing with 853 rushing yards and 4 touchdowns. Tyler Lockett leads Seattle with 62 catches for 793 yards and 6 touchdowns while DK Metcalf has 35 grabs for 595 yards and 5 TDs and Will Dissly and Jaron Brown each have 200+ receiving yards this season. Defensively, Bobby Wagner leads Seattle with 97 total tackles including 50 solo tackles while Jadaveon Clowney and Mychal Kendricks each have 3 sacks this season. As a team, Seattle is averaging 389.1 yards of total offense and 27.5 points per game while allowing 372.9 yards of total defense and 25.4 points per game this season.

The Philadelphia Eagles will look to get back above .500 after a 17-10 loss to New England last time out. QB Carson Wentz leads the Eagles with 2,274 passing yards, 16 touchdowns and 4 interceptions on 61.2% passing while Jordan Howard leads Philly with 525 rushing yards and 6 TDs and Miles Sanders has 374 rushing yards this season. Zach Ertz leads the Eagles in receiving with 55 catches for 621 yards while Alshon Jeffery, Nelson Agholor, Sanders and Dallas Goedert each have 300+ receiving yards this season. Defensively, Rodney McLeod leads the Eagles with 52 total tackles while Brandon Graham has 6 sacks this season. As a team, Philadelphia is averaging 337.8 yards of total offense and 23.4 points per game while allowing 323.5 yards of total defense and 23 points per game against this season.

Philadelphia needs this game more to stay in the playoff hunt, but everything points the other direction here. The line’s dropped 2.5 points from open, but we’re still getting a free point with a Seattle team that’s 5-0 SU and 4-1 ATS on the road this season. The Seahawks have also had all of the recent success against the Eagles and against the Eagles in Philadelphia. I’m just not a fan of Carson Wentz as I don’t think he’s the right guy for the Eagles even though the brass has him as the franchise quarterback for years to come. Russell Wilson is having an MVP-caliber season, and I just think we are getting the better team as a dog which is never a bad thing. Give me Seattle here.