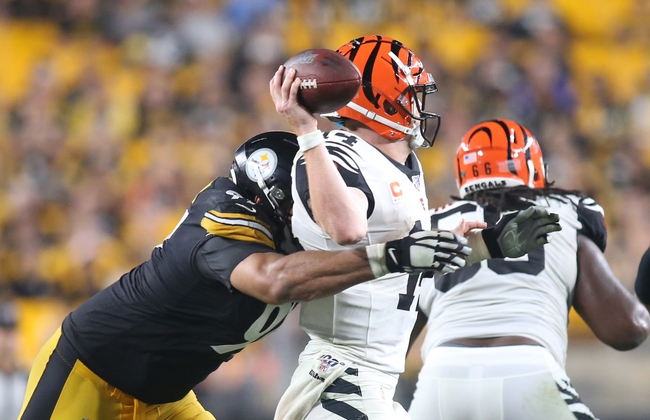 The Pittsburgh Steelers and the Cincinnati Bengals meet in a week 12 AFC North division matchup in NFL action from Paul Brown Stadium on Sunday afternoon.

The Pittsburgh Steelers come into this game looking to get back above .500 after a 21-7 loss to Cleveland on Monday night football. Mason Rudolph has thrown for 1,551 yards, 12 touchdowns and 8 interceptions on 62.3% passing while RB James Conner leads the Steelers in rushing with 390 rushing yards and 4 touchdowns. JuJu Smith-Schuster leads the Steelers’ receiving group with 38 grabs for 524 yards and 3 TDs while Diontae Johnson has 380 receiving yards and James Washington has 369 receiving yards this season. Defensively, Devin Bush leads Pittsburgh with 74 total tackles while Terrell Edmunds has 65 total tackles and Minkah Fitzpatrick has 5 interceptions this season. T.J. Watt leads the Steelers with 10.5 sacks while Bud Dupree has 6 sacks and Cameron Heyward has 5.5 sacks this season. As a team, Pittsburhg is averaging 283.5 yards of total offense and 20 points per game while allowing 328.3 yards of total defense and 20.2 points per game against this season.

The Cincinnati Bengals will still be looking for their first win after dropping to 0-10 on the year after a 17-10 loss to Oakland in their last outing. Ryan Finley has thrown for 282 yards, a touchdown and 2 interceptions on 47.5% passing while Joe Mixon leads the Bengals in rushing with 520 rushing yards. Tyler Boyd leads Cincinnati in receiving with 58 catches for 598 yards while Auden Tate has 483 receiving yards and Alex Erickson also has 343 receiving yards. Defensively, Nick Vigil leads the Bengals with 82 total tackles while Shawn Williams has.80 total tackles with a team-high 58 solo tackles and Jessie Bates III has 77 total tackles. Geno Atkins leads Cincinnati with 4.5 sacks while Sam Hubbard has 3 sacks on the year. As a team, Cincinnati is averaging 309.1 yards of total offense and 14.7 points per game while allowing 425.1 yards of total defense and 27.6 points per game against this season.

The Steelers’ dominance over Cincinnati over the last decade is well documented as Pittsburgh’s won 17 of the last 20 meetings against the Bengals, including a 27-3 beatdown earlier this season. However, it’s starting to become a matter of if the Bengals are going to win a game instead a matter of when, and the Bengals are really running out of winnable chances. This may be their best shot to get one over on Pittsburgh though as James Conner and JuJu Smith-Schuster may both miss this game as well as center Maurkice Pouncey who will miss this game as part of his suspension for his role in the brawl from the Monday night game against Cleveland, leaving the Steelers undermanned on a short week. It’s not like the Bengals have been getting blown out every week either, as 6 of their 10 losses have been by 10 points or less.  I just think in a rivalry game, the Bengals will want to make amends at home, so I’ll take a stab at Cincinnati and the points in this one.