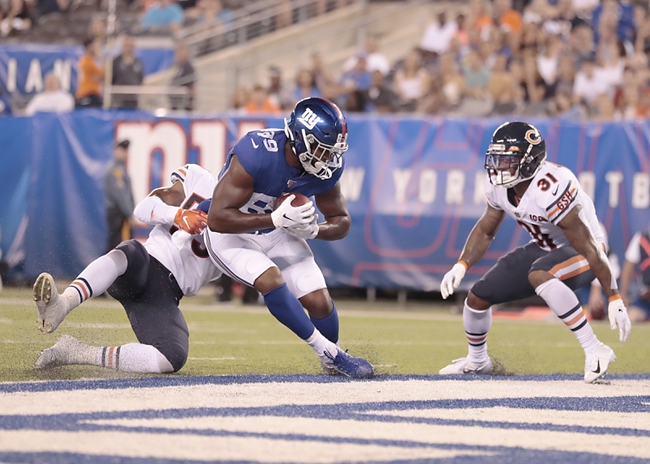 The New York Giants and the Chicago Bears meet in week 12 NFL action from Soldier Field on Sunday afternoon.

The New York Giants come into this game looking to snap a six game losing streak after a 34-27 loss to the New York Jets in their last outing. Daniel Jones has thrown for 1,984 yards, 15 touchdowns and 8 interceptions on 63% passing while Saquon Barkley leads the Giants in rushing with 402 rushing yards and a pair of touchdowns. Evan Engram leads the G-Men in receiving with 467 receiving yards and 44 receptions while Golden Tate has 417 receiving yards and Darius Slayton has 394 receiving yards and 5 TDs. Defensively, Antoine Bethea leads the Giants with 72 total tackles while Julius Peppers has 71 total tackles and Markus Golden leads New York with 6.5 sacks. Janoris Jenkins also has 4 interceptions this season. As a team, New York is averaging 322.2 yards of total offense and 20.3 points per game while allowing 381.7 yards of total defense and 28.9 points per game against this season.

The Chicago Bears are in dire need of a win after losing 5 of their last 6 games and following a 17-7 loss to the Rams last time out. Mitch Trubisky has thrown for 1,580 yards, 9 touchdowns and 4 interceptions on 62.4% passing while Chase Daniel has 435 passing yards, 3 touchdowns and 2 picks. David Montgomery leads Chicago in rushing with 497 rushing yards and 5 touchdowns while Allen Robinson II has 633 receiving yards and 3 touchdowns on 57 catches. Taylor Gabriel has 334 receiving yards with 4 touchdowns while Anthony Miller and Tarik Cohen each have 200+ receiving yards this season. Defensively, Roquan Smith leads the Bears with 79 total tackles including a team-high 53 solo tackles while Danny Trevathan has 70 total tackles. Nick Williams leads Chicago with 6 sacks while Khalil Mack has 5.5 sacks this season. As a team, Chicago is averaging 262.7 yards of total offense and 16.9 points per game while allowing 322.9 yards of total defense and 17.4 points per game against this season.

I get the Bears being favored at home, but Chicago is just a mess right now with this whole drama going on at the quarterback position. On top of that, the Bears just haven’t been playing good football, which is partially why Chicago’s in the predicament that they’re in. The Giants have been skidding, and a loss to the Jets doesn’t look good, but the Giants don’t have the pressure on them that the Bears do, as the Giants were expected to be in another retooling year. I just think this is a winnable game for the Giants, so I’ll take the points to be safe as I think Chicago struggles again here.