The Houston Texans look for a win after winning six of their last nine games. The Houston Texans have won three of their last four home games. Deshaun Watson is completing 69.5 percent of his passes for 2,601 yards, 18 touchdowns and six interceptions. Watson has two or more touchdown passes in 11 of his last 19 games. DeAndre Hopkins and Will Fuller V have combined for 1,195 receiving yards and seven touchdowns while Kenny Stills has 26 receptions. The Houston Texans ground game is averaging 140.7 yards per contest, and Carlos Hyde leads the way with 769 yards and four touchdowns. Defensively, Houston is allowing 23.2 points and 374.4 yards per game. Zach Cunningham leads the Houston Texans with 79 tackles, Whitney Mercilus has 5.5 sacks and Tashaun Gipson has two interceptions.

The Indianapolis Colts are 4-4-1 ATS in their last nine games as a road underdog. The Houston Texans are 2-5 ATS in their last seven games as a home favorite. The Indianapolis Colts have won the last three meetings against the Texans and five of the last six meetings overall. The Colts just beat the snot out of the Jacksonville Jaguars and are 6-2 SU this season with Brissett at quarterback. The Houston Texans just got manhandled by the Baltimore Ravens, but they haven't lost two straight games all season and are averaging 40 points in their last two home games. I love me some Deshaun Watson and the Texans should be favored, but I question them defensively and most of their games come down to the wire, as four of their six wins have been decided by one score. Give me the points with the Colts, and the hook could be key. 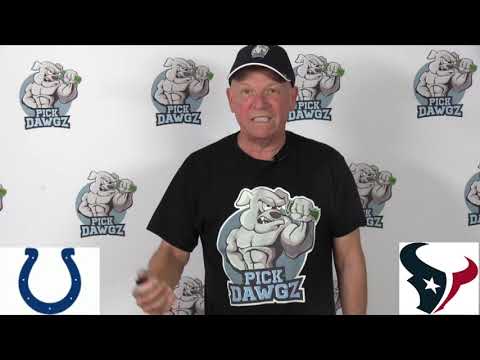