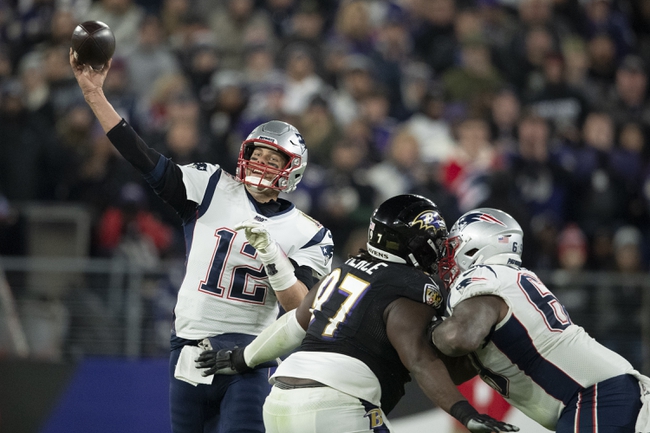 The New England Patriots and the Philadelphia Eagles meet in a Super Bowl 52 rematch in NFL action from Lincoln Financial Field on Sunday afternoon.

The New England Patriots will come into this one refreshed after their bye week following their first loss of the season after a 37-20 loss to Baltimore last time out. Tom Brady has thrown for 2,536 yards, 14 touchdowns and 5 interceptions on 64.8% passing while Sony Michel leads the Patriots with 482 rushing yards and 6 touchdowns. Julian Edelman leads New England with 663 receiving yards and 63 catches with 4 touchdowns while James White has 404 receiving yards and Phillip Dorsett II has 299 receiving yards and 4 touchdowns this year. Defensively, Jamie Collins Sr. leads the Patriots with 48 total tackles including a team-high 38 solo tackles as well as a team-high 6 sacks. Kyle Van Noy, Chase Winovich and Adam Butler each have 4.5 sacks while Devin McCourty has a team-high 5 interceptions and Collins Sr. and Stephon Gilmore each have 3 interceptions this year. As a team, New England is averaging 366.8 yards of total offense and 30 points per game which is the 2nd-highest-scoring offense in the NFL, while allowing the 2nd-fewest total yardage, giving up 249.3 yards of total defense and the 2nd-fewest passing yards per game, giving up 150.2 yards through the air, as well as the lowest scoring defense in the NFL, allowing just 10.9 points per game against this season.

The Philadelphia Eagles have had their own bye week, coming in on back-to-back wins after a 22-14 win at home over Chicago in their last outing. Carson Wentz has thrown for 2,060 yards, 15 touchdowns and 4 interceptions on 62.7% passing while Jordan Howard has 525 rushing yards and 6 touchdowns and Miles Sanders has 336 rushing yards as well this season. Zach Ertz leads Philadelphia with 46 grabs for 527 yards while Alshon Jeffery has 353 yards and 3 touchdowns receiving. The aforementioned Sanders has 305 receiving yards while Nelson Agholor and Dallas Goedert each have 200+ receiving yards this season. Defensively, Rodney McLeod leads the Eagles with 49 total tackles while Malcolm Jenkins has 39 total tackles with a team-high 30 solo tackles. Brandon Graham also has a team-high 6 sacks for the Eagles this season. As a team, Philadelphia is averaging 347 yards of total offense and 24.9 points per game while allowing 326.3 yards of total defense and 23.7 points per game against this season.

A lot of people are going to come out now and say that the Baltimore loss was proof of what happens when New England plays a real team. The problem is that New England can’t help who is in their division, which makes up almost 40% of their schedule. Now say what you want about players not paying attention to public comment, but the Patriots hear these things and that’s not good for Philadelphia. The Eagles are hard to trust to begin with and now have to play a New England team that’s had a week to rest, prepare and stew over a humiliating loss in primetime. The Patriots are still one of the elite defenses in the league this season, and I look for the Patriots to bounce back in a big way here, so I’ll lay the points with New England on the road in this one.