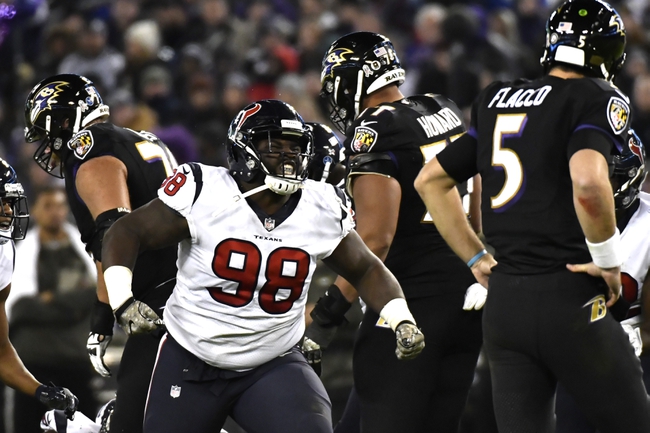 The Houston Texans look for a win after winning six of their last eight games. The Houston Texans have split their last four road games. Deshaun Watson is completing 70.2 percent of his passes for 2,432 yards, 18 touchdowns and five interceptions. Watson has two or more touchdown passes in 11 of his last 18 games. DeAndre Hopkins and Will Fuller V have combined for 1,115 receiving yards and seven touchdowns while Kenny Stills has 22 receptions. The Houston Texans ground game is averaging 142.8 yards per contest, and Carlos Hyde leads the way with 704 yards and three touchdowns. Defensively, Houston is allowing 21.2 points and 361.4 yards per game. Zach Cunningham leads the Houston Texans with 68 tackles, Whitney Mercilus has 5.5 sacks and Tashaun Gipson has two interceptions.

The Houston Texans are 4-1 ATS in their last five games as a road underdog. The Baltimore Ravens are 0-6 ATS in their last six games as a home favorite. The Houston Texans have had an extra week to prepare and get some guys back from injury, mainly on the defensive side. The Baltimore Ravens are probably the hottest team in the league right now and Lamar Jackson is getting more and more comfortable in the pocket. I love me some Deshaun Watson and we've cashed on the Texans a lot this year, but this team isn't built for the physical style of the Ravens. The Baltimore Ravens are going to bully the Texans in the trenches and that banged up secondary will have trouble as well. Give me the Ravens by a touchdown.