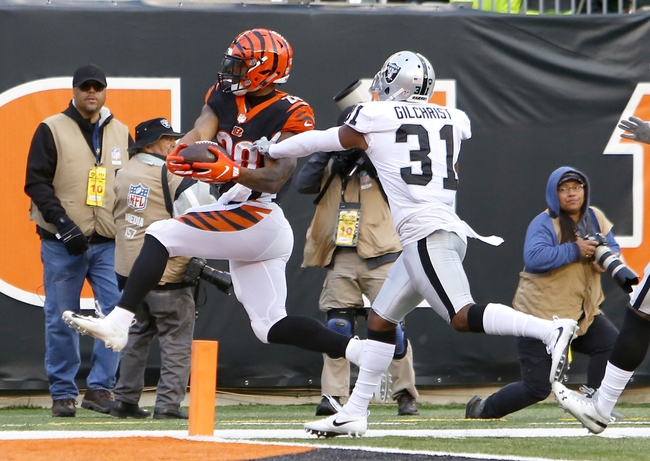 The Cincinnati Bengals and the Oakland Raiders will meet up on the NFL gridiron Sunday.

Cincinnati is 0-9 so far. In succession this year, the Bengals have lost to the Seahawks, 49ers, Bills, Steelers, Cardinals, Ravens, Jaguars, Rams and Ravens.

In the Ravens game, Cincinnati QB Ryan Finley put up 167 yards, a TD and an INT, and Joe Mixon rushed for 114 yards. Tyler Boyd caught six balls for 62 yards to lead the Bengals receivers in that one.

Over on the Raiders’ side, they’re 5-4 so far. Oakland has losses to the Chiefs, Vikings, Packers and Texans but wins over the Broncos, Colts, Bears, Lions and Chargers otherwise.

In the win over LA, Oakland QB Derek Carr managed 218 yards with a TD, and Joshua Jacobs had 71 yards with a score rushing. Jalen Richard caught four passes for 43 yards there as well.

Cincinnati is in full tank-a-thon mode right now, but they’ve been competitive in a few games—and by few, I mean four ending at six or fewer points in differential.

As for the Raiders, they’ve been playing it pretty close lately. Five of their last six games have been decided by a score or less. The Bengals obviously aren’t going anywhere this season, but with the spread at double-digits, I’m going to stick on Cincinnati to cover.