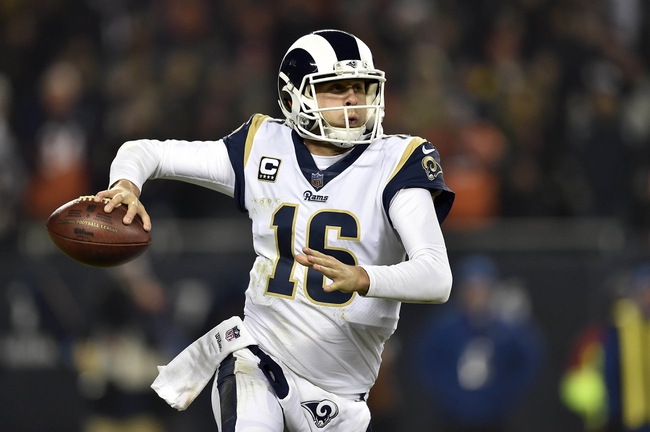 The Chicago Bears will look for a win to get back to .500 after a 20-13 win over Detroit in their last outing. Mitch Trubisky has thrown for 1,390 yards, 8 touchdowns and 3 interceptions on 63.6% passing while David Montgomery has rushed for 466 yards and 5 touchdowns. Allen Robinson II has 53 catches for 618 yards and 3 touchdowns while Taylor Gabriel, Anthony Miller and Tarik Cohen each have 200+ receiving yards, with Gabriel logging 277 yards and 4 touchdowns and Cohen logging 38 catches. Defensively, Danny Trevathan leads the Bears with 70 total tackles while Nick Williams leads Chicago with 6 sacks and Khalil Mack is right behind with 5.5 sacks. As a team, Chicago is averaging 262.2 yards of total offense and 18 points per game while allowing 327.3 yards of total defense and 17.4 points per game against this season.

The Los Angeles Rams will look to bounce back after following up their bye week with a 17-12 loss to Pittsburgh in their last outing. Jared Goff has thrown for 2,610 yards, 11 touchdowns and 9 interceptions on 60.3% passing while Todd Gurley II has 428 rushing yards and 6 TDs. Cooper Kupp leads the Rams in receiving with 58 catches for 792 yards and 5 TDs, while Robert Woods has 566 receiving yards and 45 catches. Brandin Cooks and Gerald Everett have 402 and 365 receiving yards respectively this season. Defensively, Cory Littleton leads the Rams with 80 total tackles while Clay Matthews has 7.5 sacks, Dante Fowler Jr. has 6.5 sacks and Aaron Donald has 5.5 sacks this season. As a team, Los Angeles is averaging 375.8 yards of total offense and 25.1 points per game while allowing 331 yards of total defense and 21.2 points per game against this season.

If we’re being honest, I really haven’t been impressed with Chicago for a while now, as since the end of September, the Bears have four losses and a win over a Lions team that was without their starting QB. Los Angeles hasn’t been much better, but the Rams are at home and have more promise offensively than the Bears do. I don’t love this game like I anticipated I would at the beginning of the season, but if forced to pick, I’d lay the points with Los Angeles here.