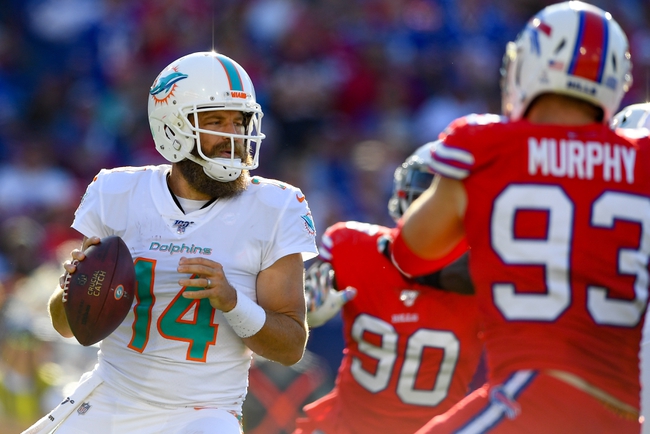 The Buffalo Bills look for a win after splitting their last six games. The Buffalo Bills have won three of their last four road games. Josh Allen is completing 59.9 percent of his passes for 1,919 yards, 10 touchdowns and seven interceptions. Allen has one or less touchdown passes in 15 of his last 20 games. John Brown and Cole Beasley have combined for 1,091 receiving yards and five touchdowns while Dawson Knox has 18 receptions. The Buffalo Bills ground game is averaging 124.3 yards per contest, and Frank Gore leads the way with 449 yards and two touchdowns. Defensively, Buffalo is allowing 16.7 points and 304.2 yards per game. Jordan Poyer leads the Buffalo Bills with 66 tackles, Jordan Phillips has six sacks and Tre'Davious White has three interceptions.

The Miami Dolphins have a chance to win three straight games for the first time since September last year. The Miami Dolphins have lost four of their last five home games. Ryan Fitzpatrick is completing 61.5 percent of his passes for 1,364 yards, eight touchdowns and eight interceptions. Josh Rosen and Fitzpatrick has have combined for nine touchdowns and 13 interceptions this season. DeVante Parker and Preston Williams have combined for 897 receiving yards and seven touchdowns while Mike Gesicki has 24 receptions. The Miami Dolphins ground game is averaging 64.4 yards per contest, and Mark Walton leads the way with 201 yards on 53 carries. Defensively, Miami is allowing 29.8 points and 391 yards per game. Jerome Baker leads the Miami Dolphins with 63 tackles, Taco Charlton has four sacks and Bobby McCain has two interceptions.

The Buffalo Bills are 3-5 ATS in their last eight games as a road favorite. The Miami Dolphins are 5-5 ATS in their last 10 games as a home underdog. The Buffalo Bills have lost two of their four games since their bye week and continue to have doubters given the heavy home schedule and the lack of quality opponents they've beaten. The Miami Dolphins went from being the clear frontrunners to get the top pick in the draft to winning back-to-back games and having a little pep in their step coming back home. I'm not a big believer in the Buffalo Bills, and the Miami Dolphins appear to be trying to win games now. You have to love the points in this spot, and I'll probably be on the ML as well come kickoff.