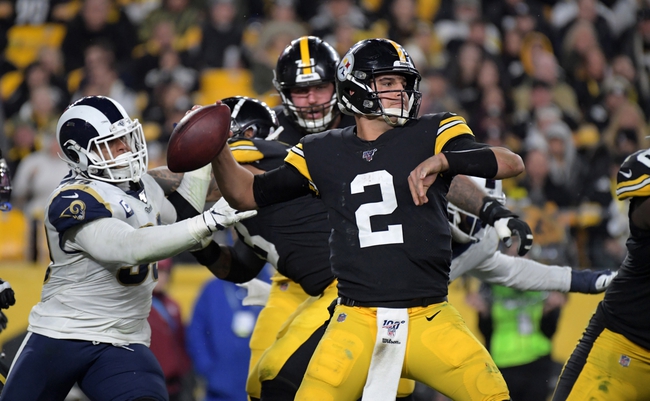 The Pittsburgh Steelers and the Cleveland Browns meet in a week 11 AFC North division matchup from FirstEnergy Stadium on Thursday night.

The Pittsburgh Steelers come into this game full of momentum after winning their last 4 games following a 17-12 win over the Los Angeles Rams in their last outing. Mason Rudolph has thrown for 1,330 yards, 11 touchdowns and 4 interceptions on 64.5% passing while James Conner leads the Steelers in rushing with 380 rushing yards and 4 touchdowns. Juju Smith-Schuster leads Pittsburgh with 36 catches for 503 yards and 3 touchdowns while Diontae Johnson has 30 catches for 363 yards and James Washington has 320 receiving yards. Defensively, Devin Bush leads Pittsburgh with 69 total tackles including a team-high 44 solo tackles while Terrell Edmunds has 62 total tackles. T.J. Watt leads Pittsburgh with 9.5 sacks while Bud Dupree has 6 sacks and Cameron Heyward has 5.5 sacks this season. Minkah Pitzpatrick leads the Steelers with 5 interceptions this season. As a team, Pittsburgh is averaging 288.8 yards of total offense and 21.4 points per game while allowing 332.2 yards of total defense and 20.1 points per game against this season.

The Cleveland Browns will look to build on a 19-16 win over Buffalo in their last outing that snapped a four game losing streak. Baker Mayfield has thrown for 2,201 yards, 9 touchdowns and 12 interceptions on 59.9% passing while Nick Chubb leads the Browns in rushing with 919 rushing yards and 6 touchdowns. Jarvis Landry leads Cleveland with 45 catches for 652 yards while Odell Beckham JR. has 44 grabs for 632 yards this season. Defensively, Joe Schobert leads the Browns with 82 total tackles including a team-high 60 solo tackles while Myles Garrett leads Cleveland with 10 sacks this season. As a team, Cleveland is averaging 348.4 yards and 19 points per game while allowing 356 yards of total defense and 24.6 points per game against this season.

Another Thursday night game that’s probably going to fit the bill of what Thursday night games have been this season, tough, gritty, ugly, grind it out games where the hits are hard and points are harder to come by. However, while the Browns beat Buffalo last time out, I just still don’t trust Cleveland for much of anything this season. It’s also hard for me to see the Browns as a favorite as they haven’t beaten Pittsburgh since October 2014, and since October 2000, Pittsburgh has won 33 of 38 head-to-head matchups with the Browns. Sometimes a team just has your number, and I think there’s something to the dominance here. I’ll take Pittsburgh and the points in a game I see the Steelers winning outright.