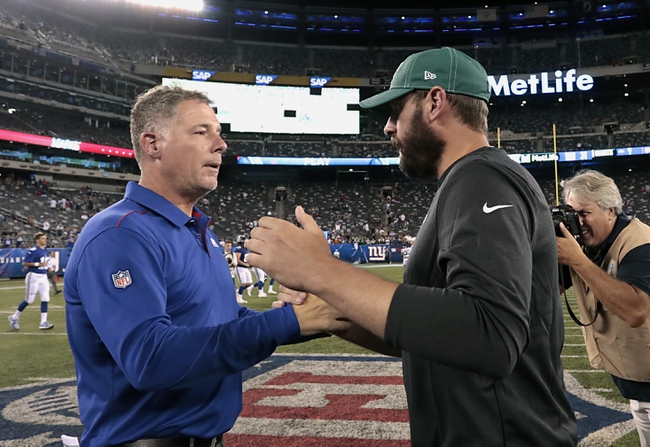 The New York Giants could use a win here to snap a five-game losing streak. The New York Giants have lost three of their last four road games. Daniel Jones is completing 62.6 percent of his passes for 1,676 yards, 11 touchdowns and eight interceptions. Jones enters this game with 257 career pass attempts under his belt. Evan Engram and Golden Tate have combined for 789 receiving yards and four touchdowns while Darius Slayton has 17 receptions. The New York Giants ground game is averaging 102.1 yards per contest, and Saquon Barkley leads the way with 401 yards and two touchdowns. Defensively, New York is allowing 28.3 points and 391.4 yards per game. Antoine Bethea leads the New York Giants with 67 tackles, Markus Golden has 5.5 sacks and Janoris Jenkins has four interceptions.

The New York Jets need a win here to snap a three-game losing streak. The New York Jets have lost three of their last four home games. Sam Darnold is completing 63.2 percent of his passes for 1,077 yards, six touchdowns and nine interceptions. Darnold has nine touchdown passes in his last seven games. Jamison Crowder and Robby Anderson have combined for 747 receiving yards and two touchdowns while Le’Veon Bell has 40 receptions. The New York Jets ground game is averaging 66.3 yards per contest, and Bell leads the way with 415 yards and one touchdown. Defensively, New York is allowing 26.4 points and 352.3 yards per game. Darryl Roberts leads the New York Jets with 47 tackles, Jordan Jenkins has three sacks and Jamal Adams has one interception.

The New York Giants are 5-2-1 ATS in their last eight games as a road favorite. The New York Jets are 1-5-1 ATS in their last seven games as a home underdog. The New York Giants may be riding a five-game losing streak, but they're competing and have been in pretty much every game they've lost, including last Monday night against the Dallas Cowboys. The New York Jets are averaging 11 points during their three-game losing streak and just lost to the Miami Dolphins, a team trying to lose on purpose. The Jets confidence has to be shot and it wouldn't be surprising to see Adam Gase fired in the coming weeks. I want nothing to do with this team. I'll lay the small number with the Giants.