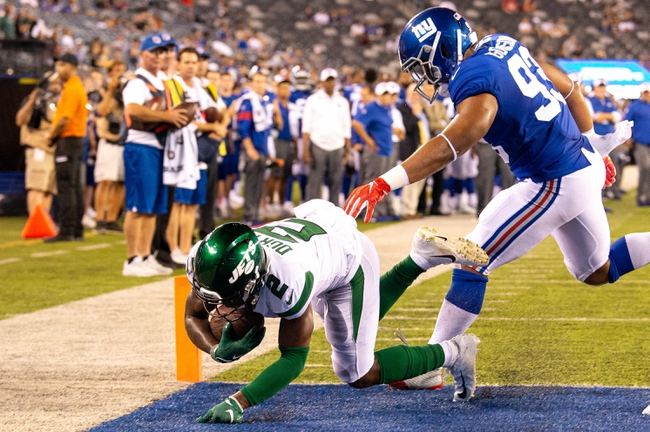 The New York Giants and the New York Jets will meet up in week 10 NFL action on Sunday.

The Giants enter this game at 2-7 so far. New York managed wins over the Buccaneers and Redskins this season, but otherwise they’ve lost to the Cowboys, Bills, Vikings, Patriots, Cardinals, Lions and Cowboys again.

In the Cowboys loss, Giants QB Daniel Jones put up 210 yards with a TD and a pick, and also led the team rushing with 54 yards. Saquon Barkley was the top receiver there on 67 yards from six grabs.

Over on the Jets’ side, they’re 1-7 this year. Outside of a victory over the Cowboys, New York has fallen to the Bills, Browns, Patriots, Eagles, Patriots again, Jaguars and Dolphins.

In the Dolphins loss, Jets QB Sam Darnold had 260 yards, one TD and one INT, and Le’Veon Bell had 66 yards rushing. Tops in receiving there was Jamison Crowder with 83 yards and a TD on eight grabs.

Okay, let’s not pretend either one of these teams is going to be anything but a dumpster fire this year. The Giants were just embarrassed by a divisional rival on national television, and the Jets just lost to the (previously) worst team in the league. It’s a complete disaster football-wise in New York right now, and it’s not going to get any better this year.

Still, there are some bright spots here: two young, promising quarterbacks, and two very talented running backs to name a few. Considering this is basically a home game for the Giants, and considering the Jets are the Jets, I have to go with the Giants here in a game no one should be watching if they’re not masochists.