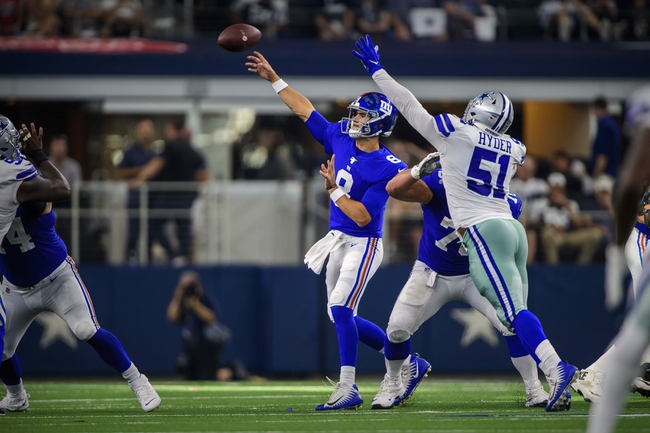 Where to Watch: ESPN, DAZN Stream live sports and exclusive originals on ESPN+. Sign up now!

The Dallas Cowboys and the New York Giants meet in this week’s installment of Monday Night Football from MetLife Stadium in NFL action.

The Dallas Cowboys come into this one rested after their bye week, having a week to take in their 37-10 beatdown of Philadelphia last time out. Dak Prescott has thrown for 2,123 yards, 12 touchdowns and 7 interceptions on 70.6% passing while Ezekiel Elliott leads the Cowboys with 602 rushing yards and 6 touchdowns. Amari Cooper leads Dallas in receiving with 38 catches for 621 yards and 5 touchdowns while Michael Gallup has 27 catches for 421 yards and Jason Witten and Randall Cobb each have 200+ receiving yards this season. Defensively, Jaylon Smith leads the Cowboys with 56 total tackles while Leighton Vander Esch is right behind with 54 total tackles and Robert Quinn has a team-high 6 sacks this season. As a team, Dallas is averaging 437.9 yards of total offense and 27.1 points per game while allowing 324.9 yards of total defense and 17.7 points per game against this season.

The New York Giants will be out to snap a four game losing streak after a 31-26 loss to the Detroit Lions in their last outing. Daniel Jones has thrown for 1,466 yards, 10 touchdowns and 7 interceptions on 62.5% passing while Saquon Barkley leads the G-Men in rushing with 373 rushing yards and 2 touchdowns. Evan Engram leads New York with 38 catches for 419 yards and 3 touchdowns while Golden Tate has 280 receiving yards and Darius Slayton and Sterling Shepard each have 267 receiving yards with Slayton logging 3 touchdown grabs this season. Defensively, Antoine Bethea leads the Giants with 58 total tackles including a team-high 39 solo tackles while Markus Golden has 6 sacks and Janoris Jenkins has a team-high 4 interceptions this year. As a team, New York is averaging 333.8 yards of total offense and 19.8 points per game while allowing 386.8 yards of total defense and 27.2 points per game against this season.

I want to give the Giants a look here as a home dog, as they’ve been competitive lately and the Giants are showing signs of promise. However, this game just means a lot more to Dallas right now as they’re trying to stave off Philadelphia and Dallas has already taken down the Giants by doubling them up 35-17 in week one. I just don’t think that changes here, even on the road, so I’ll lay the points with the Cowboys to cover against the Giants for the sixth straight meeting.