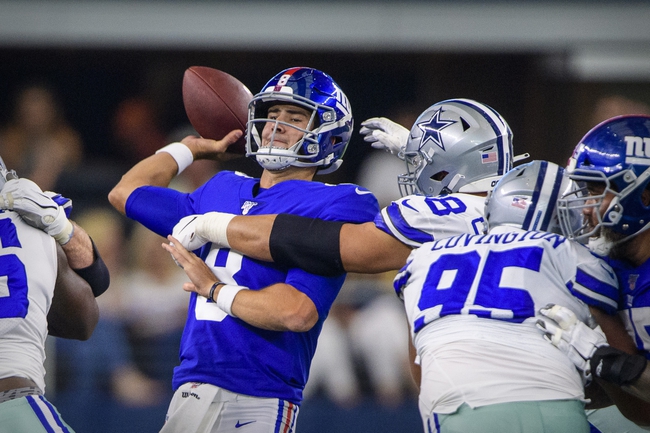 The Dallas Cowboys need a victory here after losing three of their last four games. The Dallas Cowboys have lost two of their last three road games. Dak Prescott is completing 70.6 percent of his passes for 2,123 yards, 12 touchdowns and seven interceptions. Prescott has three or more touchdown passes in four of his last 11 games. Amari Cooper and Michael Gallup have combined for 1,042 receiving yards and six touchdowns while Jason Witten has 26 receptions. The Dallas Cowboys ground game is averaging 146 yards per contest, and Ezekiel Elliott leads the way with 602 yards and six touchdowns. Defensively, Dallas is allowing 17.7 points and 324.9 yards per game. Jaylon Smith leads the Dallas Cowboys with 56 tackles, Robert Quinn has six sacks and Chidobe Awuzie has one interception.

The New York Giants look for a nice upset win to snap a four-game losing streak. The New York Giants have lost three of their last four home games. Daniel Jones is completing 62.5 percent of his passes for 1,466 yards, 10 touchdowns and seven interceptions. Jones enters this game with 216 career pass attempts under his belt. Evan Engram and Golden Tate have combined for 699 receiving yards and four touchdowns while Darius Slayton has 16 receptions. The New York Giants ground game is averaging 102.4 yards per contest, and Saquon Barkley leads the way with 373 yards and two touchdowns. Defensively, New York is allowing 27.3 points and 386.8 yards per game. Antoine Bethea leads the New York Giants with 58 tackles, Markus Golden has 5.5 sacks and Janoris Jenkins has four interceptions.

The Dallas Cowboys are 6-3-1 ATS in their last 10 games as a road favorite. The New York Giants are 1-7 ATS in their last eight games as a home underdog. The Dallas Cowboys have had extra week to prepare for this game and have won each of the last five meetings against the Giants. The New York Giants are being outscored by an average of 12.5 points during their four-game losing streak and their three losses at home are by an average of 12.6 points. There's been a lot of close games between these teams, as seven of the last 10 meetings have been decided by seven or less points. I still can't get behind the Giants with the way they're playing. This is a lot of chalk to lay with an up and down Cowboys squad, but it's Dallas or pass for me either way.