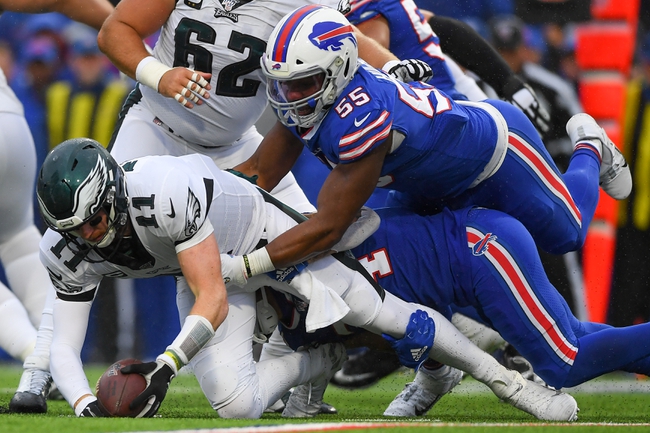 The Washington Redskins and the Buffalo Bills meet in week 9 NFL action from New Era Field on Sunday afternoon.

The Washington Redskins will look to pick up a big road win to build some confidence after a 1-7 start to the year with a 19-9 loss to Minnesota in their last outing. Case Keenum has thrown for 1,343 yards, 9 touchdowns and 4 interceptions while Adrian Peterson leads Washington in rushing with 383 rushing yards. Terry McLaurin leads Washington’s receiving group with 28 grabs for 458 yards and 5 touchdowns while Chris Thompson has 27 catches for 276 yards out of the backfield. Paul Richardson Jr., Trey Quinn, Jeremy Sprinkle and Vernon Davis each have 100+ receiving yards this season. Defensively, Landon Collins leads the Redskins with 70 total tackles including 47 solo tackles while Jon Bostic has 60 total tackles. Jonathan Allen has 4 sacks while Matt Ioannidis is right behind with 3.5 sacks and Quinton Dunbar has 3 interceptions this season. As a team, Washington is averaging 261.1 yards of total offense and 12.4 points per game while allowing 378.4 yards of total defense and 24.4 points per game against this season.

The Buffalo Bills will be looking to bounce back after a 31-13 loss to Philadelphia sent the Bills to 5-2 this season. Josh Allen has thrown for 1,493 yards, 9 touchdowns and 7 interceptions while Frank Gore leads the Bills in rushing with 422 rushing yards. John Brown leads Buffalo’s receiving group with 527 yards and 38 receptions while Cole Beasley has 33 grabs for 324 yards. Defensively, Tremaine Edmunds leads the Bills with 52 total tackles while Jordan Pryor is right behind with 51 total tackles as well as a team-high 34 solo tackles. Jordan Phillips leads Buffalo with 5 sacks while Tre’Davious white has 3 interceptions this year. As a team, Buffalo is averaging 345.7 yards of total offense and 19.1 points per game while allowing 303.9 yards of total defense and 17.4 points per game against this season.

It’s fair to say that the Bills’ 5 wins haven’t been the hardest of opponents to beat, with a combined record of 7-31 while their two losses have come to an undefeated New England team and a Philadelphia team fighting for their division. I think we all know what group the Redskins would be associated with as Washington just isn’t a good football team and the issues are piling up week to week. Buffalo needs to take advantage of these schedule spots, and while the Bills haven’t been the kind of team to blow their opponents out of the water, I just don’t know how Washington keeps this close as they’ve scored 9 points or less in each of their last four losses. Give me the Bills to win this one by double digits.