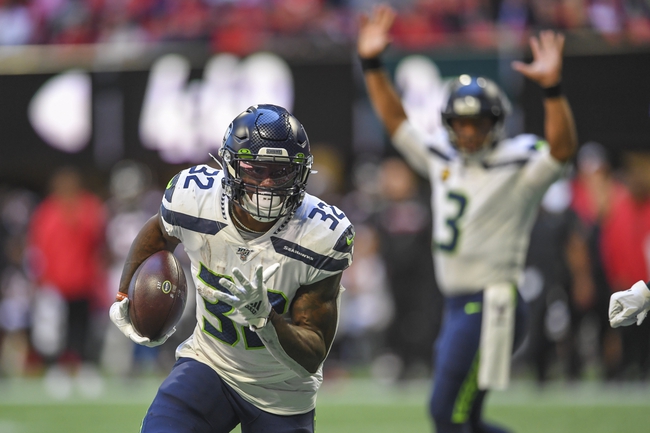 The Tampa Bay Buccaneers and the Seattle Seahawks meet in a week 9 NFL matchup from CenturyLink Field on Sunday afternoon.

The Tampa Bay Buccaneers will be out to snap a three game losing streak after a 27-23 loss to Tennessee in their last outing. Jameis Winston has thrown for 2,072 yards, 14 touchdowns and 12 interceptions on 58.2% passing while Ronald Jones II leads the Bucs in rushing with 314 rushing yards and a pair of TDs and Peyton Barber has 262 rushing yards and 3 touchdowns. Chris Godwin leads the Bucs in receiving with 705 yards and 47 receptions with 6 touchdowns while Mike Evans has 38 catches for 662 yards and 6 TDs of his own. Defensively, Lavonte David leads Tampa Bay with 53 total tackles including a tteam-high 32 solo tackles while Shaq Barrett leads not only the Buccaneers but the entire NFL with 10 sacks on the year. As a team, Tampa Bay is averaging 370.7 yards of total offense and 28 points per game while allowing 354.4 yards of total defense and 30.3 points per game against this season.

The Seattle Seahawks will look to add to their current 6-2 record after a 27-20 road win over Atlanta in their last outing. Russell Wilson has thrown for 2,127 yards, 17 touchdowns and an interception on 68.4% passing while Chris Carson leads the Seahawks on the ground with 659 rushing yards and 3 touchdowns. Tyler Lockett leads Seattle with 615 receiving yards and 4 touchdowns on 46 receptions while DK Metcalf has 402 receiving yards and 4 TD grabs of his own. Defensively, Bobby Wagner leads Seattle with 75 total tackles including a team-high 39 solo tackles while K.J. Wright has 68 total tackles and five different Seahawks have 2 sacks this season. As a team, Seattle is averaging 382.9 yards of total offense and 26 points per game while allowing 376.4 yards of total defense and 24.5 points per game against this season.

The Buccaneers could hold some value on the road as they’ve been slightly more competitive lately, but the Buccaneers continue to shoot themselves in the foot on defense, giving up at least 27 points in six of their seven games this season. Seattle isn’t the flashiest team in the world, but the Seahawks have been flying under the radar and quietly putting lots of points on the board, registering 27 or more points in seven of their last eight games. The Seahawks also own one of the tougher road environments in the NFL to go on the road and win let alone cover, so with the 12th man behind them, I’ll lay the points with Seattle here.