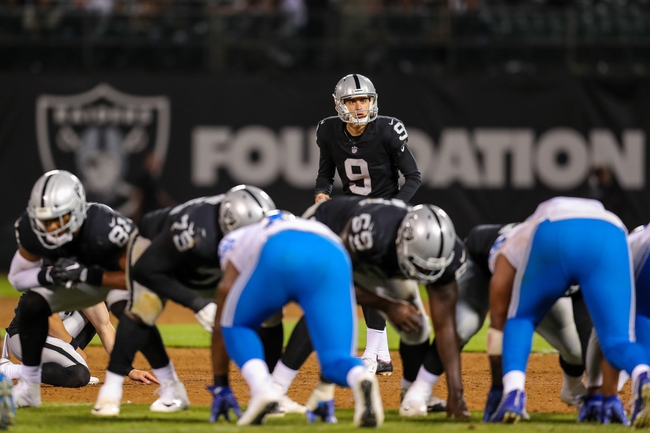 The Detroit Lions look for a big road win after splitting their last six games. The Detroit Lions are 1-1-1 SU on the road this season. Matthew Stafford is completing 64.4 percent of his passes for 2,093 yards, 16 touchdowns and four interceptions. Stafford has two or more touchdown passes in seven of his last 15 games. Kenny Golladay and Marvin Jones Jr. have combined for 917 receiving yards and 11 touchdowns while Danny Amendola has 28 receptions. The Detroit Lions ground game is averaging 96.9 yards per contest, and Kerryon Johnson leads the way with 308 yards and two touchdowns. Defensively, Detroit is allowing 26.6 points and 420.4 yards per game. Tracy Walker leads the Detroit Lions with 56 tackles, Devon Kennard has three sacks and Darius Slay has one interception.

The Oakland Raiders need a victory here after losing four of their last six games. The Oakland Raiders have split their only two true home games this season. Derek Carr is completing 72.1 percent of his passes for 1,695 yards, 11 touchdowns and four interceptions. Carr has one or less touchdown passes in seven of his last 13 games. Darren Waller and Tyrell Williams have combined for 803 receiving yards and eight touchdowns while Hunter Renfrow has 18 receptions. The Oakland Raiders ground game is averaging 131.4 yards per contest, and Josh Jacobs leads the way with 620 yards and four touchdowns. Defensively, Oakland is allowing 27.4 points and 378.1 yards per game. Tahir Whitehead leads the Oakland Raiders with 50 tackles, Benson Mayowa has 5.5 sacks and Erik Harris has one interception.

The Detroit Lions have covered six of their last eight games as a road underdog. The Oakland Raiders have covered six of their last 10 games as a home favorite. The Lions just beat up on the Giants, but they've been shaky at best on the road this season and that defense has fallen off a tad over the last four games. The Oakland Raiders will play their first true home game since September 15, as they've been on the road four times and their only home game during that span was traded for London. The Raiders are coming off a frustrating loss to the Texans and have to be thrilled to return to Oakland for the first time in a month and a half. Oakland is not an easy place to play and I'm not sure I trust the Lions outside of their dome. I'll lay the small line with the Raiders.