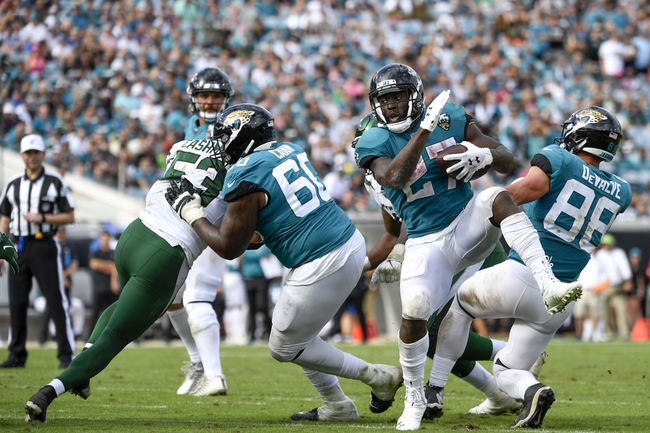 Where to Watch: DAZN Stream live sports and exclusive originals on ESPN+. Sign up now!

The Houston Texans and the Jacksonville Jaguars meet in a week 9 AFC South division matchup from Wembley Stadium on Sunday.

The Houston Texans will look to build on a 27-24 win over Oakland that pushed the Texans to 5-3 this season. Deshaun Watson has thrown for 2,231 yards, 16 touchdowns and 5 interceptions on 69.3% passing this season while Carlos Hyde has rushed for 544 yards and 3 touchdowns. Duke Johnson has 274 rushing yards while the previously mentioned Watson has 242 rushing yards and 5 touchdowns from the QB position. DeAndre Hopkins leads Houston in receiving with 60 catches for 617 yards and 3 touchdowns while Will Fuller V also has 3 touchdowns with 450 receiving yards. Kenny Stills has 315 receiving yards while Darren Fells and Jordan Akins each have 200+ receiving yards with Fells logging 5 touchdown grabs. Defensively, Zach Cunningham leads the Texans with 61 total tackles while Whitney Mercilus has 5.5 sacks to lead Houston. As a team, Houston is averaging 395 yards of total offense and 26.5 points per game while allowing 362.1 yards of total defense and 23.5 points per game against this season.

The Jacksonville Jaguars will look to build on back-to-back wins after a 29-15 win over the New York Jets in their last outing. Gardner Minshew II has thrown for 1,976 yards, 13 touchdowns and 2 interceptions on 61.9% passing while Leonard Fournette leads the Jags in rushing with 791 rushing yards. DJ Chark Jr. leads Jacksonville with 39 catches for 660 yards and 6 touchdowns while Chris Conley has 429 receiving yards and Dede Wastbrook also has 383 receiving yards this year. Defensively, Ronnie Harrison leads the Jags with 47 total tackles as well as two interceptions while Josh Allen leads the Jaguars with 7 sacks this season. As a team, Jacksonville is averaging 379.8 yards of total offense and 21.6 points per game while allowing 342.5 yards of total defense and 20.4 points per game against this season.

These overseas games can be very tricky, as you never really know what to expect. These guys will be playing at 9:30 am compared to what their body clocks are used to, and the fields in England aren’t necessarily built to handle this kind of rough battle. Instead, I’m going to side with the under as I’m expecting a sloppy kind of game like we normally see from these overseas games.