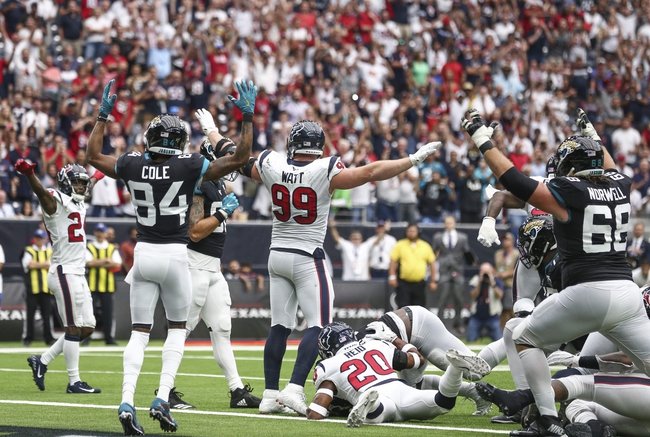 The Houston Texans look to stay hot after winning five of their last seven games. The Houston Texans have split their last four non-home games. Deshaun Watson is completing 69.3 percent of his passes for 2,231 yards, 16 touchdowns and five interceptions. Watson has two or more touchdown passes in 10 of his last 17 games. DeAndre Hopkins and Will Fuller V have combined for 1,067 receiving yards and six touchdowns while Kenny Stills has 18 receptions. The Houston Texans ground game is averaging 133.6 yards per contest, and Carlos Hyde leads the way with 544 yards and three touchdowns. Defensively, Houston is allowing 23.5 points and 362.1 yards per game. Zach Cunningham leads the Houston Texans with 60 tackles, Whitney Mercilus has 5.5 sacks and Tashaun Gipson has two interceptions.

The Houston Texans have failed to cover four of their last five games as a favorite. The Jacksonville Jaguars are 4-4 ATS in their last eight games as an underdog. Trips across the pond are always tough to predict, as you're never sure how each team is going to handle the travel and we usually see odd, sloppy games. The Jacksonville Jaguars are a team I've backed a lot this season and they've been growing on me, and the Texans are scary to back at the moment with a very banged up secondary and no JJ Watt. With that said, I still lean the Texans simply because Watson is willing his team to victories and is a young quarterback who is growing up quickly before our eyes. When in doubt, give me the team with the better quarterback.