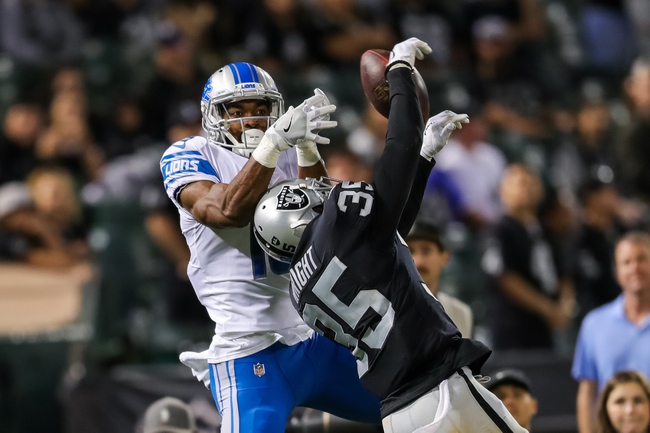 The Detroit Lions and the Oakland Raiders meet in a week 9 NFL matchup from RingCentral Coliseum on Sunday afternoon.

The Detroit Lions will be looking to build some momentum after a 31-26 win over the New York Giants in their last outing. Matthew Stafford has thrown for 2,093 yards, 16 touchdowns and 4 interceptions on 64.4% passing while Kerryon Johnson leads the Lions in rushing with 308 rushing yards and 2 TDs, but will be on the injured reserve after a procedure on his right knee. Kenny Golladay leads Detroit’s receiving group with 508 receiving yards and 6 touchdowns while Marvin Jones Jr. has a team-high 34 catches for 409 yards and 5 touchdowns. Danny Amendola has 347 receiving yards while T.J. Hockenson and Marvin Hall each have 200+ receiving yards this season. Defensively, Tracy Walker leads Detroit with 56 total tackles including a whopping 49 solo tackles while Devon Kennard and A’Shawn Robinson each have a team-high 3 sacks. As a team, Detroit is averaging 379.6 yards of total offense and 25.7 points per game while allowing 420.4 yards of total defense and 26.6 points per game against this season.

The Oakland Raiders will look to rebound from back-to-back defeats after a 27-24 loss to Houston in their last outing. Derek Carr has thrown for 1,695 yards, 11 touchdowns and 4 interceptions on 72.1% passing while Josh Jacobs leads the Raiders on the ground with 620 rushing yards and 4 touchdowns. Darren Waller leads the Raiders with 46 catches for 496 yards while Tyrell Williams has 307 receiving yards and a team-high 5 touchdowns and Hunter Renfrow has 203 receiving yards. Defensively, Tahir Whitehead leads the Raiders with 50 total tackles including a team-high 37 solo tackles while Benson Mayowa has a team-high 5.5 sacks. As a team, Oakland is averaging 371.9 yards of total offense and 21.6 points per game while allowing 380.9 yards of total defense and 27.4 points per game against this season.

Oakland has opened some eyes this year and I’ll be the first to admit that I’ve doubted the Raiders and have been wrong about them more often than not this season. However, while a cross-country tip is tough and Oakland has made their home field somewhat of a fortress, the Lions are the more consistent team offensively and have either won or lost by no more than 2 points in any of their three road games this season. I just trust Detroit slightly more than I do Oakland, so I’ll take the Lions and the points here.