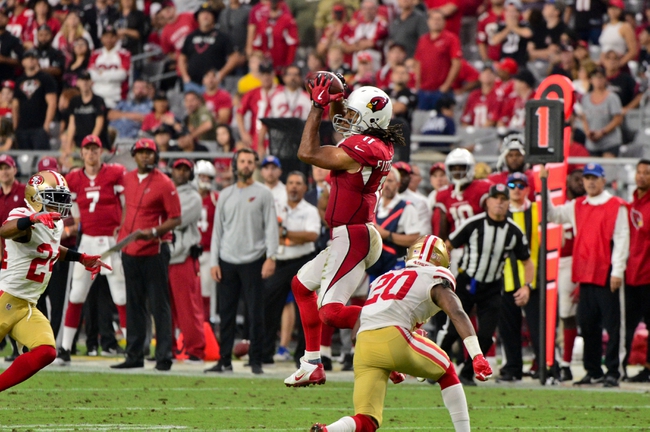 The San Francisco 49ers and the Arizona Cardinals will meet up in NFL action on Thursday.

The 49ers come in here at 7-0 on the year. San Francisco has taken out the Buccaneers, Bengals, Steelers, Browns, Rams, Redskins and Panthers in succession thus far.

In the win over Carolina, 49ers QB Jimmy Garoppolo put up 175 yards, two TDs and an INT, while Tevin Coleman rushed for 105 yards and three scores. George Kittle caught six passes for 86 yards to lead the receivers there.

Over on the Cardinals’ side, they’re 3-4-1 so far. Since tying the Lions in the opener, Arizona has beaten the Bengals, Falcons and Giants but fallen to the Ravens, Panthers, Seahawks and Saints.

In the loss to the Saints, Arizona QB Kyler Murray had 220 yards, most going to Charles Clay, who caught eight balls for 88 yards. Christian Kirk’s single 19-yard run led the team’s anemic rush.

After stalling out on offense for a couple of games—posting 20 points against the Rams and just nine against the lowly Redskins—San Francisco got back to business with a big 51-point effort against the Panthers and are looking once again like a top-tier team in the conference.

Then there’s Arizona, who had a decent three-game win streak going against a trio of not-so-good teams, but aren’t quite ready to compete against the class of the league. The line here is a little thick, but anything under double-digits still seems okay to me here. I’m going Niners.