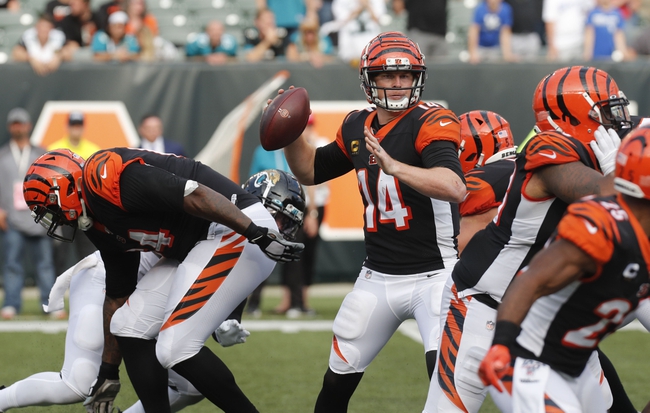 The Cincinnati Bengals and the Los Angeles Rams will match up on the NFL circuit Sunday from London.

The Bengals stumble into this one at 0-7 so far. In succession this year, Cincinnati has fallen to the Seahawks, 49ers, Bills, Steelers, Cardinals, Ravens and Jaguars.

In the loss to the Jags, Bengals QB Andy Dalton put up 276 yards with one TD and three picks, while also leading the rush on 33 yards and a TD. Alex Erickson put up eight catches for 137 yards there.

Over on the Rams’ side, they’re 4-3 so far. LA’s losses have come to the Bucs, Seahawks and 49ers but they’ve taken out the Panthers, Saints, Browns and Falcons.

In the win over the Falcons. Rams QB Jared Goff put up 268 yards with two scores and Todd Gurley added 41 rush yards. Robert Woods hauled in five catches for 80 yards as well.

Well, there’s not much to say about the Bengals this year. They’ve been in a few games this year and probably should have a couple of wins, but it’s clear this team needs major work. They made Jacksonville look good last weekend.

The Rams leave a lot to be desired as well, but pummeling the Falcons and Bengals will help their confidence before the games start getting harder again. This line is rightfully thick, but at around two touchdowns I feel like the Rams are inconsistent enough to take the Bengals to eke in there.