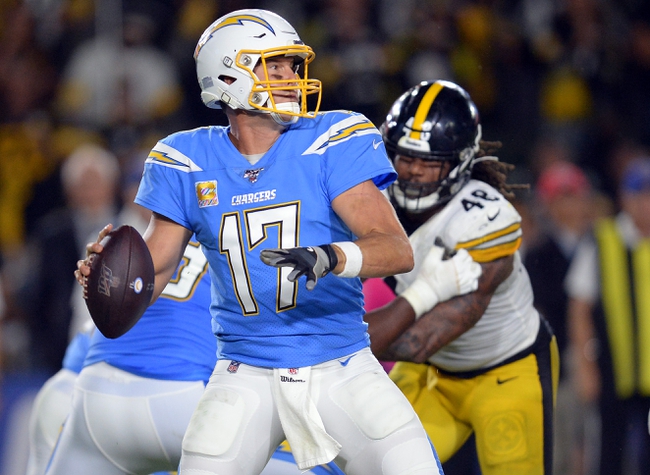 The Los Angeles Chargers and the Chicago Bears meet in a week 8 inter-conference matchup in NFL action from Soldier Field on Sunday afternoon.

The Los Angeles Chargers come into this one looking to snap a three game losing streak after making it 5 defeats in their last 6 games following a 23-20 loss to the Titans in their last outing. Philip Rivers has thrown for 2,114 yards, 11 touchdowns and 6 interceptions on 66.3% passing while Austin Ekeler leads the Chargers in rushing with 248 rushing yards and 3 TDs. Keenan Allen leads L.A. with 564 receiving yards with 3 touchdowns while the aforementioned Ekeler has 49 grabs for 488 yards and 4 scores. Mike Williams and Hunter Henry each have 200+ receiving yards for the Chargers this year. Defensively, Thomas Davis Sr. leads the Chargers with 54 total tackles while Joey Bosa has a team-high 5 sacks this season. As a team, Los Angeles is averaging 367.7 yards of total offense and 20 points per game while allowing 333.3 yards of total defense and 20.1 points per game against this season.

The Chicago Bears will look to bounce back from back-to-back losses after a 36-25 loss to New Orleans in their last outing. Mitch Trubisky has thrown for 839 yards, 5 touchdowns and 2 interceptions on 64.4% passing while David Montgomery has rushed for a team-high 231 yards and 2 touchdowns. Allen Robinson II leads the Bears in receiving with 41 grabs for 464 yards and 3 touchdowns while Tarik Cohen, Anthony Miller and Taylor Gabriel each have 100+ receiving yards this season. Defensively, Danny Trevathan leads the Bears with 55 total tackles as well as 41 solo tackles while Khalil Mack has 4.5 sacks and Nick Williams is right behind with 4 sacks this season. As a team, Chicago is averaging 263.7 yards of total offense and 18.7 points per game while allowing 330.8 yards of total defense and 17.5 points per game against this season.

This is a really low total, but with that said, I’m still going to side with the under here. Chicago isn’t good offensively, and the Bears do the majority of their damage to opponents with their stout defense. On the other hand, the Chargers have lost 5 of their last 6 with the lone win coming against the lowly, winless Miami Dolphins and in those 5 losses the Chargers failed to break 20 points. I just think this is another game where both offensive units struggle to find points, so I’ll back the under in this one.