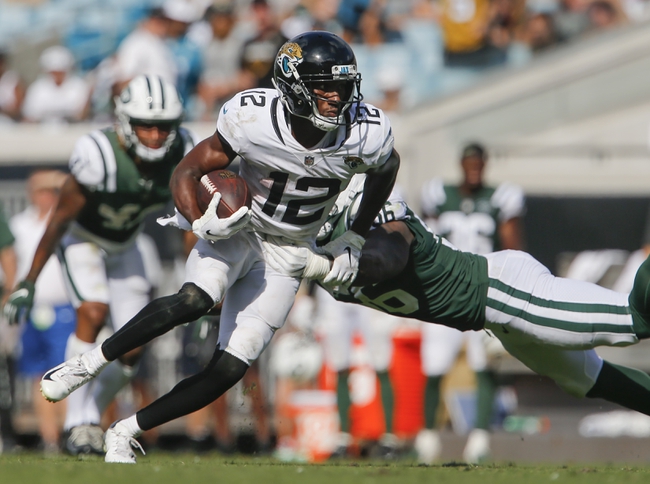 The New York Jets and the Jacksonville Jaguars meet in a week 8 NFL matchup from TIAA Bank Field on Sunday afternoon.

The New York Jets will look to rebound after falling to 1-5 on the year after a 33-0 beatdown loss at the hands of New England in their last outing. Heading into Monday’s game Sam Darnold has thrown for 513 yards, 3 touchdowns and an interception while Le’Veon Bell leads the Jets in rushing with 256 rushing yards. Jamison Crowder leads the Jets with 28 catches for 272 yards while Robby Anderson is the only other 200+ yard receiver for the Jets this season with 250 receiving yards. Defensively, Neville Hewitt leads the Jets with 37 total tackles as well as a pair of sacks while Darryl Roberts had 31 total tackles including a team-high 27 solo tackles. Heading into Monday, New York is averaging 209 yards of total offense and 10.5 points per game while allowing 352.2 yards of total defense and 26 points per game against this season.

The Jacksonville Jaguars will look for a win to get back above .500 after improving to 3-4 on the year with a 27-17 win over Cincinnati last time out. Gardner Minshew II has thrown for 1,697 yards, 10 touchdowns and 2 interceptions while Leonard Fournette has rushed for 715 yards and a touchdown. DJ Chark Jr. leads the Jags in receiving with 33 grabs for 581 yards and 5 touchdowns while Dede Westbrook and Chris Conley each have 300+ receiving yards this season. Defensively, Ronnie Harrison leads the Jags with 42 total tackles including a team-high 25 solo tackles while Josh Allen leads Jacksonville with 5 sacks this season. As a team, Jacksonville is averaging 378.4 yards of total offense and 20.6 points per game while allowing 361 yards of total defense and 21.1 points per game against this season.

Jacksonville has been up and down this season, but the Jaguars even at 3-4 are still in the thick of their division race. New York is pretty much on the road to playing for draft positioning at this point and the offense is flat out laughable right now as the Jets just don’t remember how to score. I honestly thought this line was going to be higher after how the Jets underwhelmed on Monday night, but I’ll take the low line as I think Jacksonville is easily capable of winning this one by a touchdown.