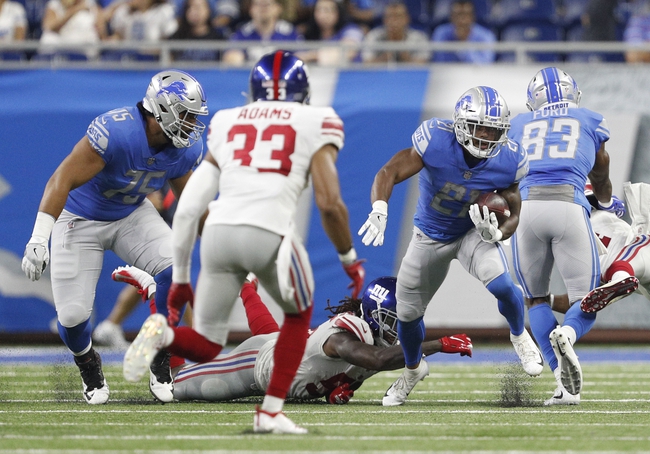 The New York Giants and the Detroit Lions will match up in NFL activity on Sunday.

The Giants enter this game at 2-5 so far. New York has wins over the Bucs and Redskins but has fallen to the Cowboys, Bills, Vikings, Patriots and Cardinals.

In the loss to Arizona, Saquon Barkley led the rush with 72 yards and a TD, while QB Daniel Jones had 223 yards, one TD and an INT. Golden Tate was the top receiver there with 80 yards on six grabs.

Over on the Lions’ side, they’re 2-3-1 so far. After tying Arizona in the opener, the Lions got wins over the Chargers and Eagles before falling to the Chiefs, Packers and Vikings.

In the loss to Minnesota, the Lions’ QB Matt Stafford put up 364 yards, four TDs and a pick, while Ty Johnson led an anemic rush on 29 yards. Danny Amendola had 105 yards on eight catches as well.

New York has some budding talent on their roster, but not much consistency offensively. They’re also coughing up a lot of points in their last three games; 28 against the Vikings, 35 against the Pats and 27 versus Arizona.

The Lions are in something of a similar situation, as they gave up 34 to the Chiefs, 23 to the Packers and 42 to the Vikings. I’ll give Detroit a bit of a break for a tough run of games, though. The line here seems about right and you could make a good case either way. I’m going to give the Lions a slight advantage but staying away.