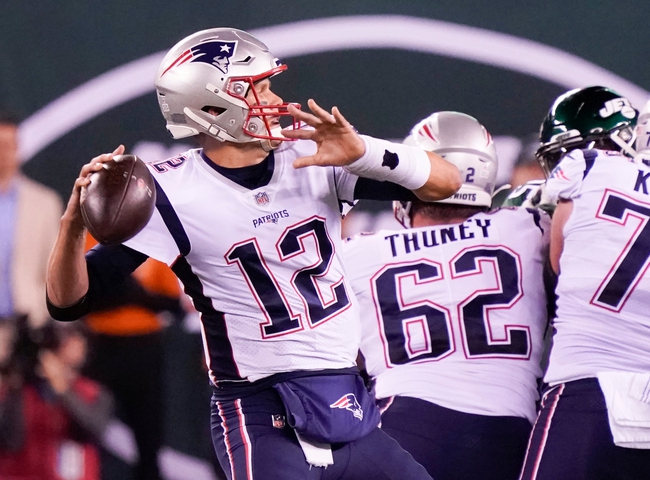 The Cleveland Browns and the New England Patriots meet in week 8 NFL action from Gillette Stadium on Sunday afternoon.

The Cleveland Browns come into this game rested after their bye week, hoping to start the climb back after falling to 2-4 with a 32-28 loss to Seattle in their last outing. Baker Mayfield has thrown for 1,496 yards, 5 touchdowns and 11 interceptions on 56.6% passing while Nick Chubb leads the Browns in rushing with 607 rushing yards and 6 touchdowns. Jarvis Landry leads Cleveland with 429 receiving yards while Odell Beckham Jr. has a team-high 29 catches for 436 yards this season. Ricky-Seals Jones has 143 receinving yards and 2 touchdowns while Chubb and Damion Ratley each have 100+ receiving yards this season. Defensively, Joe Schobert leads Cleveland with 62 total tackles including a team-high 43 solo tackles while Myles Garrett is tied for the NFL lead with 9 sacks this season. As a team, Cleveland is averaging 351.2 yards of total offense and 20 points per game while allowing 373.3 yards of total defense and 25.7 points per game against this season.

The New England Patriots will look for another win to add to their 7-0 start to the year after a 33-0 crushing of the New York Jets on Monday night football. Tom Brady has thrown for 1,992 yards, 11 touchdowns and 4 interceptions on 65.9% passing while Sony Michel leads the Patriots in rushing with 390 rushing yards and 6 touchdowns. Julian Edelman leads New England with 45 receptions for 496 yards and 2 touchdowns while Josh Gordon, James White and Phillip Dorsett II each have 200+ receiving yards with Dorsett II adding a team-high 4 receiving touchdowns. Defensively, Jason  McCourty leads the Pats with 32 total tackles while Jamie Collins Sr. has 31 total tackles, 4.5 sacks and 3 interceptions. Devin McCourty has a team-high 5 interceptions while Chase Winovich has 4 sacks. As a team, New England is averaging 377.3 yards of total offense and the highest-scoring offense in the NFL with 31.9 points per game while allowing the fewest yardage, giving up 223.1 yards of total defense while also boasting the NFL’s stingiest defense allowing just 6.9 points per game this season.

This is a prime look-ahead spot for New England with a matchup with another division leader in Baltimore on deck, and the Pats are on a short week while the Browns have had their bye week to rest up and prepare for this game. However, this Patriots team is stomping holes in teams left and right. You can argue that the Pats have had an easy schedule, but the defense has still suffocated the opponents and made up for whatever deficiencies the offense has had this season. The Browns have played better on the road than at home as that’s where both of their wins have come this season, but I just think that the Browns are in over their heads here. I’ll lay the points with New England in another beatdown.