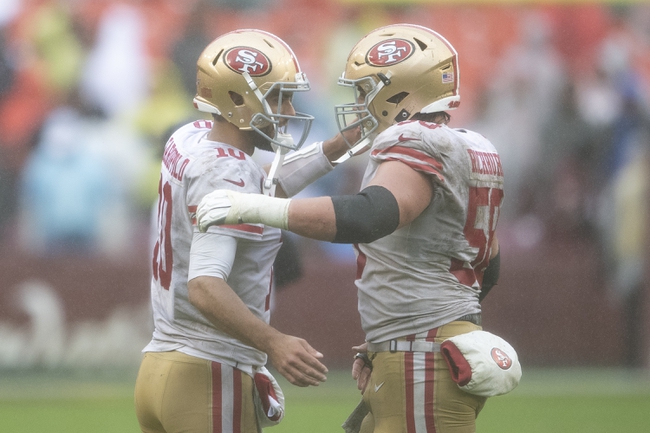 The Carolina Panthers and the San Francisco 49ers will meet up on the NFL circuit Sunday.

The Panthers come in here at 4-2 so far. Carolina fell to the Rams and Bucs in their first two games but since have beaten the Cardinals, Texans, Jaguars and Buccaneers in succession.

In the win over Tampa, Panthers QB Kyle Allen posted 227 yards with two scores, and Christian McCaffrey added 31 yards and a TD. DJ Moore was the top receiver there on 73 yards from seven catches.

Over on the 49ers’ side, they’re 6-0 so far. San Francisco has dispatched the Buccaneers, Bengals, Steelers, Browns, Rams and Redskins in succession this season.

In the win over the Redskins, 49ers QB Jimmy Garoppolo managed 151 yards with an INT and Tevin Coleman led the rush with 62 yards. Kendrick Bourne was the top receiver there with 69 yards on three catches.

Over this four-game win streak, the Panthers have posted some pretty solid points totals. In that stretch Carolina has at least 34 points in three of four games, but they’ve also given up a combined 53 across their last pair.

As for San Fran, they’re coming off a weird 9-0 game against the Redskins, which stopped a trend of 20 or more points scored in five straight. The Niners should be able to get it going again here and the line doesn’t look too bad so I’m just going to stick with San Francisco.