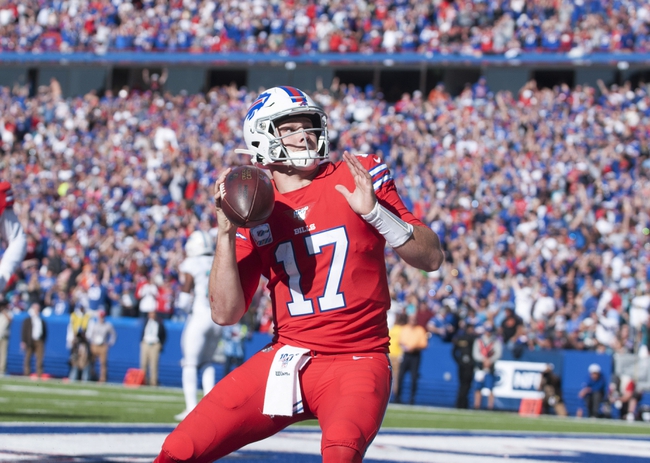 The Philadelphia Eagles and the Buffalo Bills meet in week 8 NFL action from New Era Field on Sunday afternoon.

The Philadelphia Eagles will be out to rebound after a 37-10 humiliation at the hands of the Dallas Cowboys on Sunday Night Football. Carson Wentz has thrown for 1,649 yards, 13 touchdowns and 4 interceptions while Jordan Howard leads Philly in rushing with 347 rushing yards and 4 touchdowns. Zach Ertz leads the Eagles in receiving with 35 catches for 404 yards while Nelson Agholor and Alshon Jeffery had 254 and 253 receiving yards respectively with 3 touchdowns and Miles Sanders has 230 receiving yards. Defensively, Rodney McLeod leads the Eagles with 41 total tackles while Brandon Graham has a team-high 4 sacks and Nathan Gerry has a pair of interceptions. As a team, Philadelphia is averaging 339.9 yards of total offense and 24.4 points per game while allowing 360 yards of total defense and 26.6 points per game against this season.

The Buffalo Bills will look to build on back-to-back wins after a 31-21 win over Miami in their last outing. Josh Allen has thrown for 1,324 yards, 7 touchdowns and 7 picks while Frank Gore leads the Bills in rushing with 388 rushing yards and 2 touchdowns and the previously mentioned Allen also had 2 touchdowns with 190 rushing yards. John Brown leads Buffalo in receiving with 33 catches for 473 yards and 2 touchdowns while Cole Beasley has 30 grabs for 283 yards. Defensively, Tremaine Edmunds leads Buffalo with 43 total tackles while Jordan Poyer is right behind with 42 total tackles including a team-high 31 solo tackles Tre’Davious White has 3 interceptions while Jordan Phillips has 4 sacks this year. As a team, Buffalo is averaging 361.2 yards of total offense and 20.2 points per game while allowing 292.7 yards of total defense and 15.2 points per game against this season.

You could make a case for Philadelphia as the Eagles are desperate and have a tough next couple of games with Chicago and New England on deck. However, if you take this low of a line, you’re saying that Philadelphia wins outright and with the way Buffalo’s been playing at home and the way that the defense has stepped up for the Bills, I don’t see that happening here. Philadelphia is just too inconsistent for my liking and we’re getting a near pick ‘em scenario with arguably the best Bills team we’ve seen in quite some time. I’ll lay the points with the Bills in this spot.