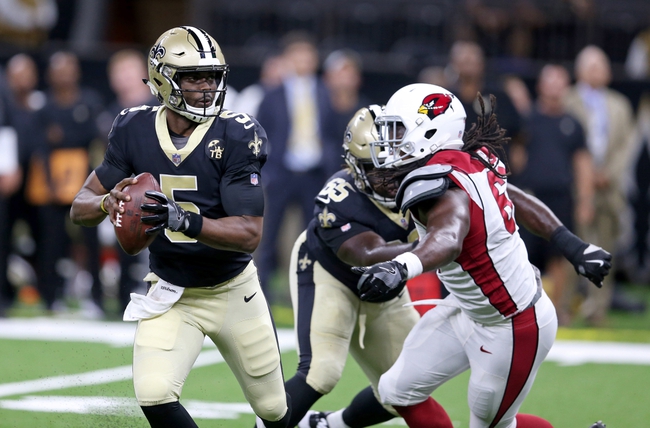 The Arizona Cardinals and the New Orleans Saints meet in week 8 NFL action from the Mercedes-Benz Superdome on Sunday afternoon.

The Arizona Cardinals will look to build on their current three game winning streak after a 27-21 win over the New York Giants on the road in their last outing. Kyler Murray has thrown for 1,768 yards, 7 touchdowns and 4 interceptions on 64.5% passing while David Johnson leads the Cardinals in rushing with 300 rushing yards and 2 touchdowns and Chase Edmonds has 287 rushing yards and 4 touchdowns. The aforementioned Murray also has 266 rushing yards and 2 rushing TDs this season. Larry Fitzgerald leads Arizona in receiving with 36 grabs for 439 yards and 3 touchdowns while David Johnson has 315 rushing yards and 3 receiving scores. Christian Kirk has 242 receiving yards while the Cardinals have 4 other 100+ yard receivers this season. Defensively, Jordan Hicks leads the Saints with 69 total tackles including a team-high 38 solo tackles while Chandler Jones has a team-high 8.5 sacks and Terrell Suggs has 5 sacks this year. As a team, Arizona is averaging 358 yards of total offense and 23 points per game while allowing 392.4 yards of total defense and 27.4 points per game against this season.

The New Orleans Saints will look to keep their momentum going after making it five wins in a row with a 36-25 road win over Chicago last time out. Teddy Bridgewater has thrown for 1,370 yards, 9 touchdowns and 2 interceptions while Alvin Kamara leads the Saints in rushing with 373 rushing yards and Latavius Murray has 257 rushing yards and 3 touchdowns. Michael Thomas leads the Saints with 62 receptions for 763 yards and 3 touchdowns while the previously mentioned Kamara and Ted Ginn Jr. each have 200+ receiving yards this season. Defensively, Vonn Bell leads the Saints with 46 total tackles and Demario Davis is right behind with 45 total tackles including a team-high 36 solo tackles while Cameron Jodan leads New Orleans with 7 sacks this year. As a team, New Orleans is averaging 356 yards of total offense and 23.4 points per game while allowing 327.9 yards of total defense and 21 points per game against this season.

I like how New Orleans has kept things together this season, going 6-1 with Drew Brees out since week 2 and inserting Teddy Bridgewater under center. There’s also word that Alvin Kamara may be back for the Saints as well as Brees. However, there’s probably going to be some signs of rust for both Brees and Kamara, and the Cardinals while young, have shown some serious fight this season, especially on the road where they’re 2-1 on the year with their one loss ending as a 6-point loss to Baltimore which is definitely nothing to sneeze at. I just think that Arizona is more than capable of hanging around in this one and keeping the score within single digits, so I’ll take a stab at Arizona and the points in this one.