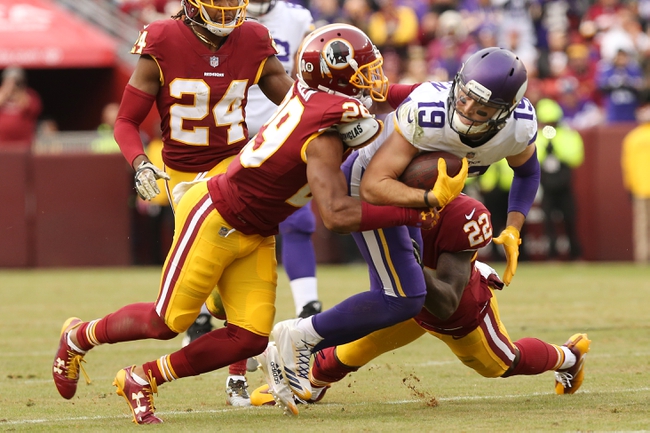 The Washington Redskins and the Minnesota Vikings meet in NFL action from U.S. Bank Stadium on this week’s installment of Thursday night football.

The Washington Redskins will look to bounce back on the road after falling at home to San Francisco by a final score of 9-0 in their last outing, moving their record to 1-6 on the year. Case Keenum has thrown for 1,213 yards, 9 touchdowns and 4 interceptions while Adrian Peterson leads the Redskins in rushing with 307 rushing yards and a touchdown. Terry McLaurin leads the Redskins with 419 receiving yards and 5 touchdowns while Chris Thompson has 276 receiving yards and a team-high 27 receptions out of the backfield. Defensively, Landon Collins leads the Redskins with 59 total tackles including 41 solo tackles while Jonathan Allen has 3 sacks and Matt Ioannidis has 2.5 sacks. Quinton Dunbar leads the Redskins with 3 interceptions this season. As a team, Washington is averaging 267.6 yards of total offense and 12.9 points per game while allowing 370.4 yards of total defense and 25.1 points per game against this season.

The Minnesota Vikings will look to build on their current three game winning streak after a 42-30 win over Detroit in their last outing. Kirk Cousins has thrown for 1,711 yards, 13 touchdowns and 3 interceptions while Dalvin Cook has rushed for 725 yards and 8 touchdowns to lead Minnesota on the ground. Alexander Mattison has also contributed 270 rushing yards while Stefon Diggs leads the Vikings with 30 catches for 562 yards and 4 touchdowns and Adam Thielen has 27 catches for 391 yards and a team-high 6 touchdowns. Defensively, Eric Kendricks leads the Vikings with 61 total tackles including a team-high 44 solo tackles while Danielle Hunter leads Minnesota with 7 sacks and Everson Griffen has 4 sacks this season. As a team, Minnesota is averaging 391 yards of total offense and 27.4 points per game while allowing 327.9 yards of total defense and 17.6 points per game against this season.

These Thursday night games have had a history of being really sloppy games with the majority of the teams playing on a short week. A large line like this also lends itself to potentially contributing to another underdog covering on the Thursday nighter. However, Washington just has a ton of issues on both sides of the ball right now and while the ‘Skins have the notoriety of being just the 2nd team in the last 25 years to cover a spread without scoring a point, the fact is that the Redskins were still shut out, making it 3 out of the last 4 games failing to score more than 7 points. Minnesota is a much better team at home compared to their play on the road, and all five of their wins have been by double digits, including going 3-0 at home with an average margin of victory of 18 points per game. I just think that the Redskins are outmatched here from top to bottom so I’ll lay the points with Minnesota in this one.