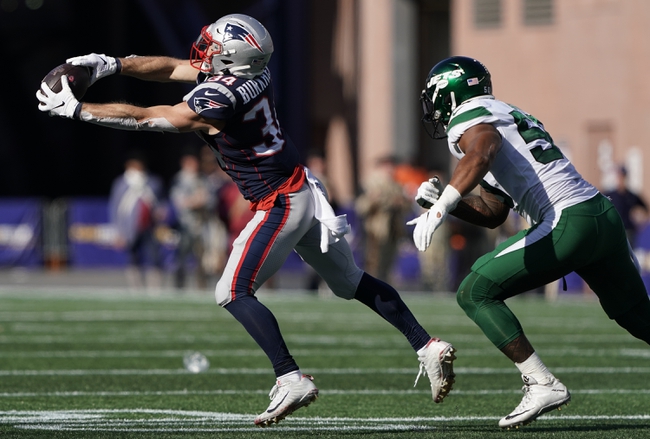 The New England Patriots and the New York Jets meet in a week 7 AFC East division matchup in NFL action from MetLife Stadium in this week’s edition of Monday Night Football.

The New England Patriots will be looking to add to their unbeaten 6-0 start following a 35-14 win over the New York Giants last time out. Tom Brady has thrown for 1,743 yards, 10 touchdowns and 3 interceptions on 65.4% passing while Sony Michel has rushed for 348 rushing yards and 3 touchdowns. Julian Edelman leads New England with 38 grabs for 449 yards and a pair of touchdowns while Josh Gordon has 287 receiving yards and James White has 224 receiving yards this season. Phillip Dorsett II has 197 receiving yards and 3 receiving TDs while Jakobi Meyers, Rex Burkhead and Ryan Izzo each have 100+ receiving yards this year. Defensively, Jamie Collins Sr. leads the Pats with 30 total tackles including a team-high 23 solo tackles as well as a team-high 4.5 sacks and 3 interceptions while Devin McCourty has 4 interceptions to lead New England in that department this season. As a team, New England is averaging 386.3 yards of total offense while boasting the highest scoring offense in the NFL, averaging 31.7 points per game. On defense, the Pats own the league’s stingiest defense, giving up league lows of 234.7 yards of total defense and 8 points per game this season.

The New York Jets will look for a big performance at home to build on their first win of the year following a 24-22 win over Dallas last time out. Sam Darnold has thrown for 513 yards, 3 touchdowns and an interception on 69.9% passing while Le’Veon Bell leads the Jets in rushing with 256 rushing yards. Jamison Crowder leads New York with 28 catches for 272 yards while Robby Anderson has 259 receiving yards and the aforementioned Bell has 28 catches of his own for 169 receiving yards. Defensively, Neville Hewitt leads New York with 37 total tackles and a pair of sacks while Darryl Roberts has 31 total tackles including a team-high 27 solo tackles and Jordan Jenkins has a pair of INTs as well this year. As a team, New York is averaging 220 yards of total offense and 12.6 points per game while allowing 357.8 yards of total defense and 24.6 points per game against this season.

Getting a home dog can be tempting, especially now that the Jets have Darnold back, have a win under their belts and have already covered against New England on the road this season. However, the Patriots have only gotten better since that first meeting and five of their six wins this season have come by at least 16 points, including their week 3 win over these same New York Jets. I just don’t see New York being able to keep up with the Patriots and doing any damage to this stout defense, so I’ll lay the points with New England on the road in this spot.