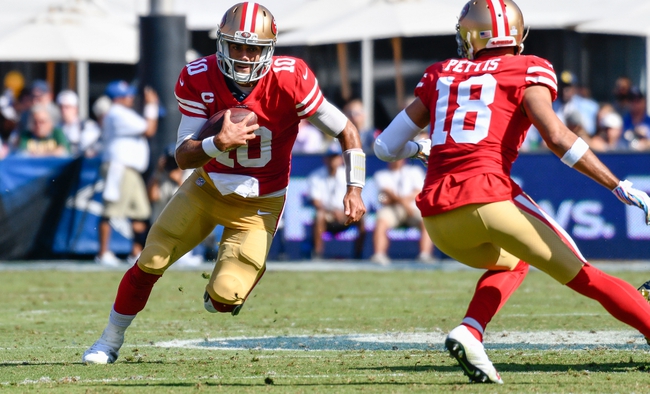 The San Francisco 49ers and the Washington Redskins meet in an NFL matchup from Fedex Field on Sunday afternoon.

The San Francisco 49ers will look to remain unbeaten after improving to 5-0 with a 20-7 win over the Rams in their last outing. Jimmy Garoppolo has thrown for 1,163 yards, 7 touchdowns and 5 interceptions on 69.9% passing while Matt Breida leads the 49ers in rushing with 376 rushing yards and Raheem Mostert isn’t far behind with 249 rushing yards this season. Tevin Coleman is 3rd on the ground with 165 rushing yards and a pair of touchdowns while Jeff Wilson Jr. has 4 rushing scores this year. George Kittle leads the 49ers in receiving with 31 catches for 338 yards while Marquise Goodwin and Deebo Samuel each have 100+ receiving yards for the Niners this year. Defensively, Fred Warner leads the 49ers with 31 total tackles including a team-high 24 solo tackles. Dee Ford leads San Fran with 3.5 sacks while DeForest Buckner and Nick Bosa each have 3 sacks and Richard Sherman and K’Waun Williams each have a pair of interceptions this year. As a team, San Francisco is averaging 408 yards of total offense and the 3rd-hiehest scoring offense in the league averaging 29.4 points per game while allowing the 2nd-fewest yards per game giving up 237.4 yards per game and the 2nd-lowest scoring defense in the NFL, allowing just 12.8 points per game this season.

The Washington Redskins will look to build on their first win of the season coming in the form of a narrow 17-16 decision over Miami in their last outing. Case Keenum leads the Redskins with 1,136 passing yards, 9 touchdowns and 4 interceptions on 65.6% passing while Adrian Peterson leads Washington in rushing with 226 rushing yards this year. Terry McLaurin leads Washington in receiving with 23 grabs for 408 yards and 5 touchdowns while Chris Thompson has a team-high 27 grabs for 276 yards. Paul Richardson Jr., Trey Quinn and Vernon Davis each have 100+ receiving yards for Washington this year. Defensively, Landon Collins leads the Redskins with 55 total tackles including 39 solo tackles while Cole Holcomb and Jon Bostic each have 44 total tackles. Jonathan Allen leads the Redskins with 3 sacks while Matt Ioannidis has 3.5 sacks and Quinton Dunbar leads the Redskins with 3 interceptions this season. As a team, Washington is averaging 286.5 yards of total offense and 15 points per game while allowing 385 yards of total defense and 27.8 points per game against this season.

I think prior to last week you could’ve made a case that San Fran’s perfect start is a bit fraudulent as they hadn’t played anyone of consequence. However, last week’s win over the Rams was a statement as the 49ers didn’t just win, they held the defending NFC champions to 7 points, making it 4 of 5 games this season that the Niners have won by at least 13 points. Washington may be able to start turning things around now that they’re in the win column, but I just don’t see it happening here as the 49ers have demolished teams on the road, winning each of their road games so far this season by an average of 17 points per game. I think San Fran stays perfect with another road win in the 24-13 range, so I’ll lay the points with San Francisco on the road here.