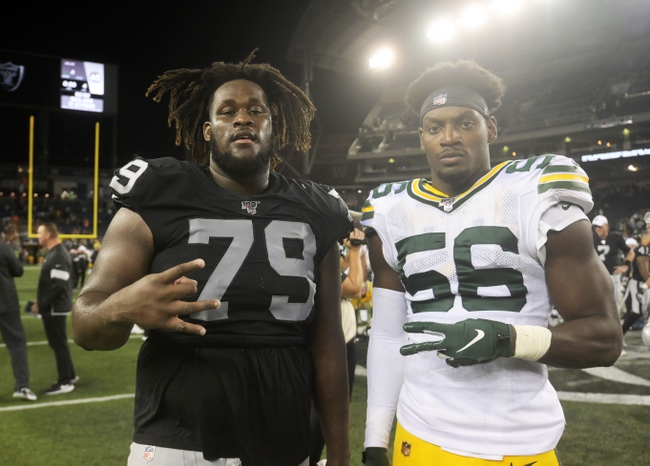 The Oakland Raiders look for a statement victory after splitting their last four games. The Oakland Raiders have lost eight of their last 10 road games. Derek Carr is completing 73.3 percent of his passes for 1,117 yards, six touchdowns and three interceptions. Carr has one or less touchdown passes in seven of his last 11 games. Darren Waller and Tyrell Williams have combined for 575 receiving yards and four touchdowns while Hunter Renfrow has 12 receptions. The Oakland Raiders ground game is averaging 134.4 yards per contest, and Josh Jacobs leads the way with 430 yards and four touchdowns. Defensively, Oakland is allowing 24.6 points and 355.6 yards per game. Tahir Whitehead leads the Oakland Raiders with 31 tackles, Benson Mayowa has 4.5 sacks and Erik Harris has one interception.

The Oakland Raiders have failed to cover six of their last eight games as a road underdog. The Green Bay Packers have split their last 14 games ATS as a home favorite. Don't look now, but the Raiders are coming off back-to-back wins over playoff contenders and have a ground game that's gotten hot and taken pressure off the rest of the offense. There's also a clear rest advantage for the Raiders, as they just enjoyed a bye week, while the Packers played Monday night, so they have an even shorter week. Throw in the injuries to the Packers receivers and how limited the offense is, and you have to like the value of the free points with the Raiders.