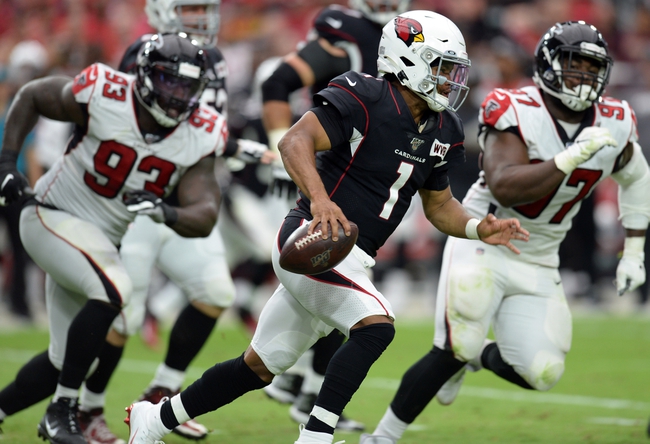 The Arizona Cardinals and the New York Giants meet in a week 7 NFL matchup from MetLife Stadium on Sunday afternoon.

The Arizona Cardinals will look to build on back-to-back wins after a 34-33 win over Atlanta in their last outing. Kyler Murray has thrown for 1,664 yards, 7 touchdowns and 4 interceptions on 64.3% passing while David Johnson leads the Cardinals in rushing with 298 rushing yards and the aforementioned Murray has 238 rushing yards and 2 touchdowns this season. Larry Fitzgerald leads Arizona’s receiving group with 35 catches for 427 yards and 2 touchdowns while Johnson has 30 catches for 315 yards and 3 TDs out of the Cardinal backfield. Christian Kirk has 242 receiving yards while Damiere Byrd and KeeSean Johnson each have 100+ receiving yards this season. Defensively, Jordan Hicks leads the Cardinals with a team-high 62 total tackles including 35 solo tackles while Chandler Jones leads Arizona with 4.5 sacks and Terrell Suggs has 4 sacks this season. As a team, Arizona is averaging 376.8 yards of total offense and 22.3 points per game while allowing 414 yards of total defense and 28.5 points per game against this season.

The New York Giants will look to bounce back from consecutive losses following a 35-14 beatdown at the hands of New England in their last outing. Daniel Jones has thrown for 921 yards, 5 touchdowns and 6 interceptions on 60.7$ passing while Saquon Barkley remains the Giants’ top running back with 237 rushing yards. Evan Engram leads the Giants with 33 catches for 373 yards and a pair of touchdowns while Sterling Shepard has 267 receiving yards and Darius Slayton, Golden Tate and Cody Latimer each have 100+ receiving yards this season. Defensively, Antoine Bethea leads New York with 46 total tackles while Markus Golden leads the Giants with 5 sacks and Janoris Jenkins has a team-high 3 interceptions this season. As a team, New York is averaging 339.5 yards of total offense and 18.5 points per game while allowing 412.3 yards of total defense and 26.7 points per game against this season.

I understand the Giants being favored at home, but the Giants have also lost back-to-back games and are still incredibly banged up right now. Arizona is building confidence after back-to-back wins and side-by-side, I just feel like the Cardinals’ offense has the bigger upside right now and is more capable of putting points on the board, so I’ll take Arizona and the free field goal in a game I see the Cardinals winning outright to build a decent winning streak.