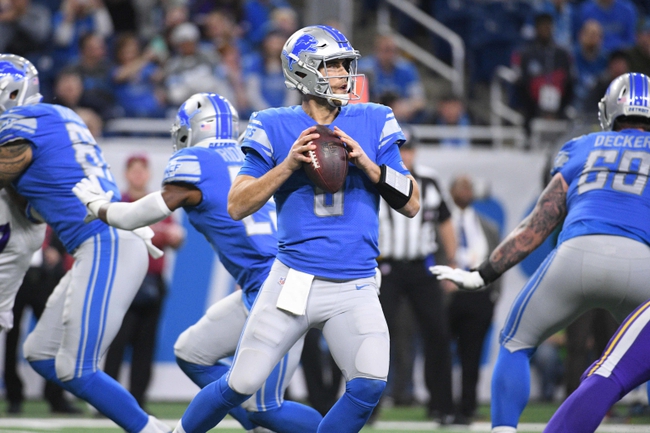 The Minnesota Vikings and the Detroit Lions meet in a week 7 NFC North division showdown from Ford Field on Sunday afternoon.

The Minnesota Vikings will look to build on back-to-back wins after a 38-20 victory over Philadelphia last time out. Kirk Cousins has thrown for 1,374 yards, 9 touchdowns and 3 interceptions on 69.7% passing while Dalvin Cook leads the Vikings in rushing with 583 rushing yards and 6 touchdowns and Alexander Mattison has 252 yards on the ground with a touchdown as well. Stefon Diggs leads the Vikings with 420 receiving yards and 4 touchdowns while Adam Thielen has 26 grabs for 366 yards and a team-high 5 touchdowns. Defensively, Eric Kendricks leads Minnesota with 49 total tackles including a team-high 38 solo tackles while Danielle Hunter leads the Vikings with 6 sacks. As a team, Detroit is averaging 372.3 yards of total offense and 25 points per game while allowing 310.3 yards of total defense and 15.5 points per game against this season.

The Detroit Lions come into this one on a short week after a 23-22 loss to Green Bay in their last outing. Matthew Stafford has thrown for 1,387 yards, 9 touchdowns and 2 interceptions on 61.3% passing while Kerryon Johnson leads the Lions with 285 rushing yards and 2 touchdowns. Kenny Golladay leads Detroit with 34 catches for 364 yards and 4 touchdowns while Marvin Jones Jr. has 294 receiving yards and 20 catches. T.J. Hockenson, Danny Amendola, the aforementioned Johnson and Marvin Hall each have 100+ receiving yards for the Lions this season. Defensively, Tracy Walker leads the Lions with 43 total tackles including a team-high 37 solo tackles while Devon Kennard leads the Lions with 3 sacks. As a team, Detroit is averaging 369.8 yards of total offense and 23.8 points per game while allowing 413.8 yards of total defense and 23.6 points per game against this season.

This has some potential to be one of the better games on Sunday and it’s safe to say that these two teams don’t like each other. However, Detroit is coming off of one of the most controversial losses in recent memory, and it’s a loss that could be big in the playoff race down the road in a couple of months. Minnesota’s not the same team on the road that they are at home, and the Vikings have lost both of their divisional road games this season. I think this is a game that Detroit uses to take some frustration out after getting hosed against the Packers, so I’ll side with Detroit at home for the win and cover here.