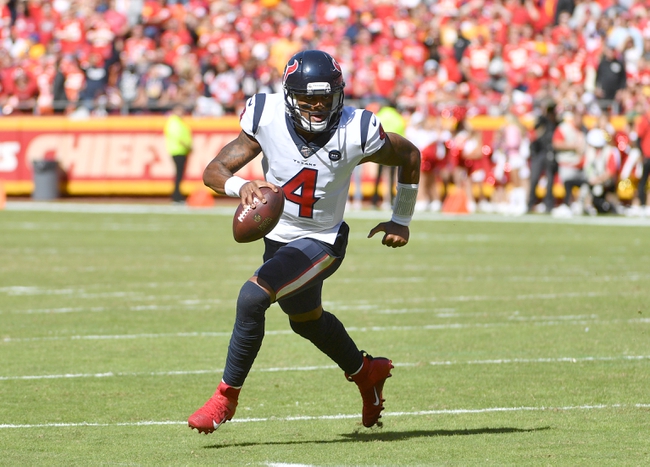 The Houston Texans and the Indianapolis Colts meet in a week 7 AFC South division matchup from Lucas Oil Stadium on Sunday afternoon.

The Houston Texans will be looking to build on back-to-back wins after a 31-24 win over Kansas City in their last outing. Deshaun Watson has thrown for 1,644 yards, 12 touchdowns and 3 interceptions on 69.7% passing while Carlos Hyde leads Houston on the ground with 426 rushing yards and 3 TD. Will Fuller V leads Houston’s receiving group with 33 catches for 444 yards and 3 touchdowns while DeAndre Hopkins has a team-high 40 receptions for 402 yards. Jordan Akins, Kenny Stills, Darren Fells, Keke Coutee and the aforementioned Duke Johnson each have 100+ receiving yards for the Texans this season. Defensively, Zach Cunningham leads the Texans with 46 total tackles including a team-high 30 solo tackles while Benardrick McKinney has 45 total tackles and Justin Reid has 43 total tackles with 30 solo tackles of his own. Whitney Mercilus leads the Texans with 5 sacks while J.J. Watt is right behind with 4 sacks and Tashaun Gipson Sr. has a pair of interceptions this season. As a team, Houston is averaging 396.8 yards of total offense and 27 points per game while allowing 356 yards of total defense and 22.3 points per game against this season.

The Indianapolis Colts come into this one rested after their bye week, trying to follow up their 19-13 primetime road win over Kansas City in their last outing. Jacoby Brissett has thrown for 1,062 yards, 10 touchdowns and 3 interceptions while Marlon Mack leads the Colts on the ground with 470 rushing yards and 2 touchdowns. T.Y. Hilton leads Indy’s receiving group with 24 catches for 232 yards and 4 touchdowns while Eric Ebron, Zach Pascal, Jack Doyle and Nyheim Hines each have 100+ receiving yards this season. Defensively, Anthony Walker leads the Colts with 36 total tackles including a team-high 27 solo tackles while Denico Autry leads the Colts with 2.5 sacks this season. As a team, Indianapolis is averaging 344 yards of total offense and 22.6 points per game while allowing 355.2 yards of total defense and 23 points per game against this season.

The Colts in a near pick ‘em at home is tempting as they’re rested and have won four of the last five matchups with Houston straight up. However, the bye week can be a blessing and a curse as whatever momentum the Colts had from their road win in primetime against the Chiefs has had some time to settle down while Houston picked up their own win at Arrowhead after thrashing Atlanta and come in rolling. I just think that right now, the Texans are in a slightly better spot than the Colts are right now and Deshaun Watson has done some of his best work on the road, throwing for an average of 299.6 yards per game away from home. I’ll take Houston in this matchup and the free point.