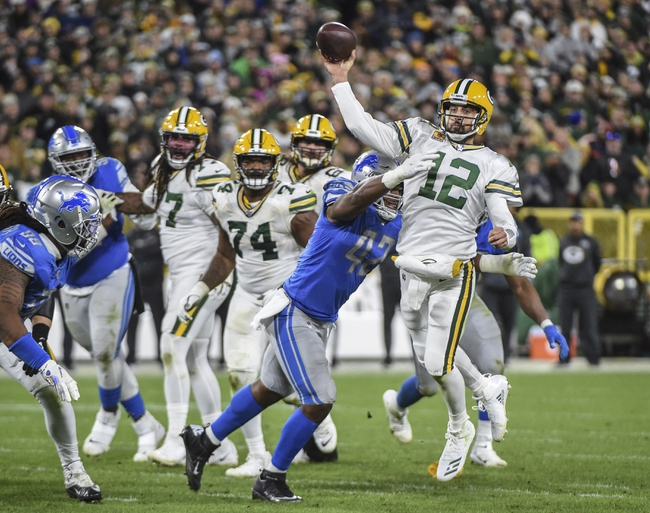 The Oakland Raiders and the Green Bay Packers meet in a week 7 NFL matchup from Lambeau Field on Sunday afternoon.

The Oakland Raiders come into this one rested after their bye week following a 24-21 win over Chicago in London to vault Oakland to 3-2 this season. Derek Carr has thrown for 1,117 yards, 6 touchdowns and 3 interceptions on 73.3% passing while Josh Jacobs leads Oakland on the ground with 430 rushing yards and 4 touchdowns this season. Darren Waller leads Oakland in receiving with 37 grabs for 359 yards while Tyrell Williams has 216 receiving yards and 4 touchdowns. Defensively, Tahir Whitehead leads the Raiders with 31 total tackles including a team-high 25 solo tackles while Benson Mayowa has a team-high 4.5 sacks this season. As a team, Oakland is averaging 348.2 yards of total offense and 20.6 points per game while allowing 359.4 yards of total defense and 24.6 points per game against this season.

The Green Bay Packers will look to build on their 5-1 start to the year after edging out a 23-22 win over Detroit on Monday Night Football to improve to 5-1 this season. Heading into Monday’s action, Aaron Rodgers leads Green Bay with 1,307 yards, 6 touchdowns and an interception while Aaron Jones leads Green Bay in rushing with 302 rushing yards and 8 touchdowns. Davante Adams leads Green Bay with 25 catches for 378 yards while Marquez Valdes-Scantling has 235 receiving yards and the aforementioned Jones, Jimmy Graham and Geronimo Allison each have 100+ receiving yards for the Packers this season. Defensively, Blake Martinez leads Green Bay with 55 total tackles including 37 solo tackles while Preston Smith has a team-high 5.5 sacks and Za’Darius Smith is right behind with 5 sacks this season. As a team, Green Bay is averaging 355.5 yards of total offense and 23.7 points per game while allowing 363.8 yards of total defense and 19.2 points per game against this season.

I’ve been the first to discount the Raiders and it’s blown up in my face more often than not this season as Oakland is right in the thick of things in the division race. However, even on a short week, I think Green Bay holds a definite edge with Lambeau Field and that environment being a huge X-factor. Green Bay just keeps finding ways to win and I think that the Packers are more than capable of winning this one by a touchdown thanks to their solid defense, so I’ll lay the points with Green Bay here.