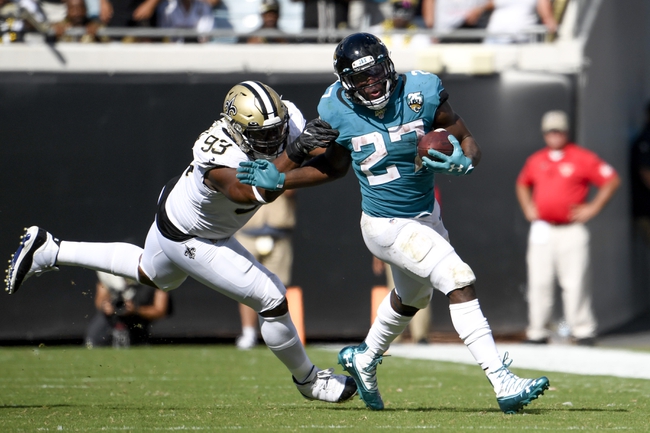 The Jacksonville Jaguars and the Cincinnati Bengals meet in week 7 NFL action from Paul Brown Stadium on Sunday afternoon.

The Jacksonville Jaguars will look to rebound from back-to-back losses after a 13-6 loss to New Orleans in their last outing. Gardner Minshew II has thrown for 1,442 yards, 9 touchdowns and 2 interceptions on 63.9% passing while Leonard Fournette leads the Jaguars in rushing with 584 rushing yards and a touchdown. DJ Chark Jr. leads the Jaguars’ receiving corps with 30 catches for 528 yards and 5 touchdowns while Dede Westbrook and Chris Conley each have 200+ receiving yards for Jacksonville this season. Defnesively, Ronnie Harrison leads the Jaguars with 39 total tackles including a team-high 23 solo tackles while Josh Allen has a team-high 4 sacks and Calais Campbell and Dawuane Smoot each have 3 sacks this season. As a team, Jacksonville is averaging 364.8 yards of total offense and 19.5 points per game while allowing 372.7 yards of total defense and 21.8 points per game against this season.

The Cincinnati Bengals will still be hunting for their first win of the season after dropping to 0-6 with a 23-17 loss to Baltimore in their last outing. Andy Dalton has thrown for 1,647 yards, 7 touchdowns and 5 interceptions on 61.7% passing while Joe Mixon leads the Bengals in rushing with 252 rushing yards and Tyler Boyd is Cincinnati’s top receiver with 40 catches for 416 yards this season. John Ross III has 328 receiving yards and 3 touchdowns while Auden Tate has 261 receiving yards for the Bengals this year. Defensively, Nick Vigil leads the Bengals with 51 total tackles, while Shawn Williams has 49 total tackles with a team-high 35 solo tackles and Sam Hubbard has a team-high 3 sacks this season. As a team, Cincinnati is averaging 307.7 yards of total offense and 16.2 points per game while allowing 426 yards of total defense and 26.5 points per game against this season.

I’m really tempted to give Cincinnati and the free field goal a look as the Bengals have been highly competitive more often than not this season, with four of their six losses coming by six points or less. However, the last game had a window dressing touchdown that meant nothing late except a backdoor cover which is really all we care about in this line of work. Jacksonville’s had their own issues, but the Jaguars are probably the better team on defense and I think the offenses are pretty much even, so I’ll lay the field goal with the Jaguars on the road in this spot.