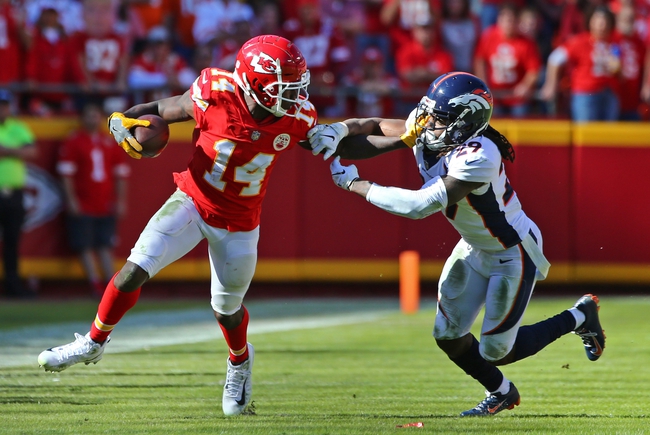 The Kansas City Chiefs and the Denver Broncos will match up in NFL action on Thursday.

The Chiefs enter here at 4-2 on the season. Kansas City got wins in their first four straight against the Jaguars, Raiders, Ravens and Lions but fallen in their last two versus the Colts and Houston.

In the loss to the Texans, Patrick Mahomes posted 273 yards with three TDs and one INT, while LeSean McCoy had 44 yards rushing. Tyreek Hill managed 80 yards and two scores on five catches.

Over on the Broncos’ side, they’re 2-4 this year. Denver opened up with losses to the Raiders, Bears, Packers and Jaguars but have won their last two against the Chargers and Titans.

In the win over the Titans, Broncos QB Joe Flacco had 177 yards with an INT, and Phillip Lindsay had 70 yards and a TD rushing. Courtland Sutton added 76 yards on four catches.

The once-infallible Chiefs are looking pretty vulnerable lately after playing four straight one-score games, two of which they lost. The fact that neither Indy or Houston is considered to be a great team doesn’t help matters.

Give some credit to the Broncos, though; after being in the league doghouse for four weeks they’ve managed to cobble together consecutive wins so that’s commendable. Still, I’m going to say the Chiefs get back on track here and bang out a cover; the talent disparity should show itself well in this one.