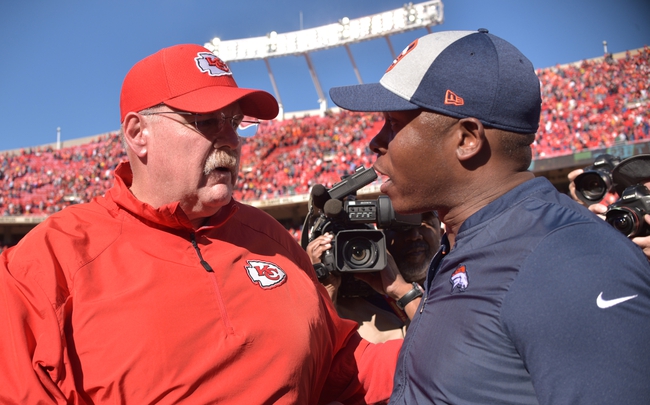 The Denver Broncos look for a third straight win to save their season and rebound from a 2-4 hole. The Denver Broncos have lost four of their last five home games. Joe Flacco is completing 66.3 percent of his passes for 1,435 yards, six touchdowns and five interceptions. Flacco has one or less touchdown passes in six of his last seven games. Courtland Sutton and Emmanuel Sanders have combined for 784 receiving yards and five touchdowns while Noah Fant has 14 receptions. The Denver Broncos ground game is averaging 116 yards per contest, and Phillip Lindsay leads the way with 397 yards and four touchdowns. Defensively, Denver is allowing 17.7 points and 307.8 yards per game. Justin Simmons leads the Denver Broncos with 30 tackles, DeMarcus Walker has three sacks and Alexander Johnson has one interception.

The Kansas City Chiefs have split their last 12 games ATS as a road favorite. The Denver Broncos have covered 10 of their last 15 games as a home underdog. The Broncos have lost seven straight to the Chiefs, but four of the last six meetings have been decided by seven or less points. The Broncos have finally figured out how to turn these close games into victories and playing in Denver is never easy for an opponent. These AFC West games are usually weird, competitive and come down to the wire, regardless of the two teams playing, and you should expect much of the same with both clubs playing o short rest and the trend of the underdogs covering Thursday night. It's only a matter of time before the Kansas City Chiefs bounce back in a big way, but I'm still leaning toward the Broncos and the free points at home.