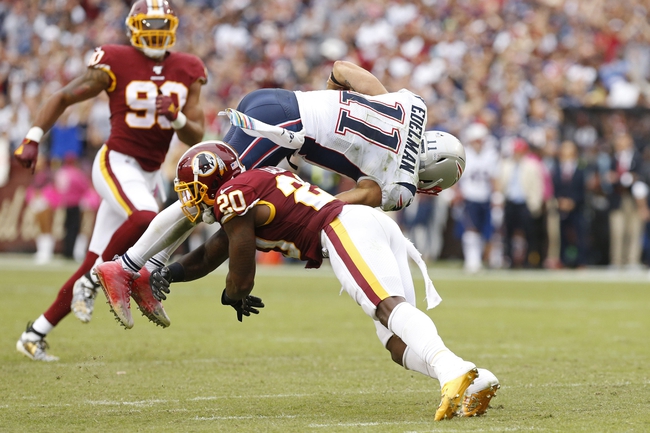 The Washington Redskins and the Miami Dolphins meet in an inter-conference matchup in NFL action from Hard Rock Stadium on Sunday afternoon.

The Washington Redskins will look to pick up their first win of the season after falling to 0-5 with a 33-7 loss to New England in their last outing. Case Keenum has thrown for 970 yards, 7 touchdowns and 4 interceptions on 68.1% passing while Adrian Peterson leads the Redskins with 108 rushing yards and a touchdown. Terry McLaurin leads the Redskins in receiving with 308 receiving yards and 3 touchdowns while Chris Thompson has a team-high 25 receptions for 268 receiving yards. Defensively, Landon Collins leads the Redskins with 43 total tackles including a team-high 29 solo tackles while Montae Nicholson and Quinton Dunbar each have a pair of interceptions. As a team, Washington is averaging 281.6 yards of total offense and 14.6 points per game while allowing 407.8 yards of total defense and 30.2 points per game against this season.

The Miami Dolphins will also be on the hunt for their first win of the season following their bye week, sitting at 0-4 on the year after a 30-10 loss to the Chargers last time out. Josh Rosen has thrown for 482 yards, a touchdown and 3 interceptions on 51.2% passing while Kenyan Drake leads the Dolphins in rushing with 113 rushing yards. Preston Williams and DeVante Parker each have a team-high 201 receiving yards with Williams logging a team-high 15 receptions. Defensively, Jerome Baker leads the Dolphins with 29 total tackles including 16 solo tackles while Eric Rowe has 23 total tackles with 16 solo tackles of his own. Taco Charlton leads Miami with a pair of sacks this year. As a team, Miami is averaging 225 yards of total offense and 6.5 points per game while allowing 472 yards of total defense and 40.8 points per game against this season.

There’s no amount of money I could be given to bet this game, heck I wouldn’t even bet it with your money. I mean lets be real, tickets to the Miami Zoo are more expensive than some tickets to this game. But we’re here to give picks and even with this dumpster fire of a matchup, that’s not going to change. Miami getting points at home could be worth a look, but the only time the Dolphins showed some fight was in the first half against Dallas, and that’s when things fell apart as usual, as the Dolphins have been outscored more in the 2nd half  than any team has been outscored overall this season, including Washington’s -78 point differential this entire season. Washington doesn’t have much going for them either, especially on the road, but they have more experience and more talent on both sides of the ball and should be able to win this one by at least 4-6 points but again, if you feel the need to bet this game, we need to have a serious discussion.