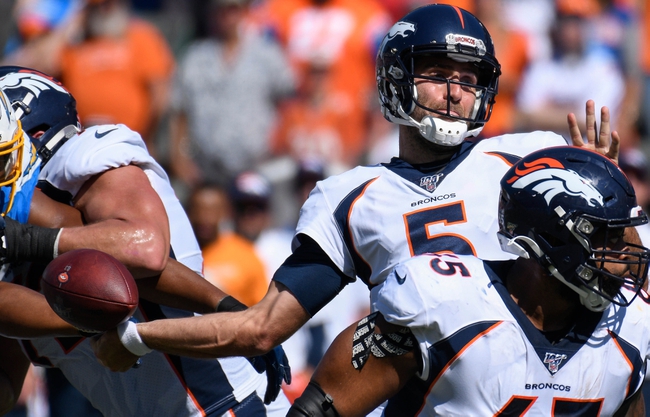 The Tennessee Titans and the Denver Broncos will match up in NFL activity on Sunday.

In the loss to the Bills, Tennessee QB Marcus Mariota logged 183 pass yards, with Jonnu Smith hauling in one catch for 57 yards and the bulk of the stats. Derrick Henry rushed for 78 yards and a TD there as well.

Over on the Broncos’ side, they’re 1-4 this season. Denver opened up with losses to the Raiders, Bears, Packers and Jaguars but were able to get in the win column last weekend versus the Chargers 20-13.

In the Week 5 win, Denver QB Joe Flacco had 182 yards with a TD and a pick, while Phillip Lindsay had 114 yards and a score. Courtland Sutton added 92 yards and a TD on four catches in that one.

Only one of Tennessee’s three losses has come by more than seven points (13 versus Jacksonville), so if the team could close things out a little better this year they’d be in a much nicer position record-wise. As it stands however, the Titans have a few winnable games in the immediate future, starting here.

As for Denver, they’re not a good team by any stretch but to their credit they’ve been hanging around in games. Three of their four losses have come by one score or less. I’m not wild about Tennessee, but I feel like the Titans have a little more talent right now. This one will probably be close; I’m going to stick with Tennessee, who I like to get a win here.