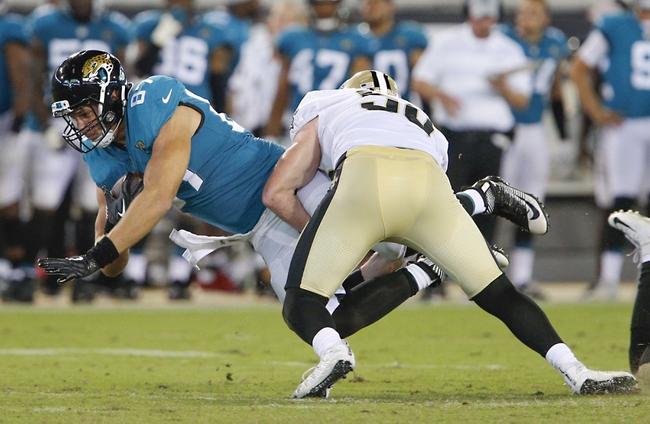 The New Orleans Saints and the Jacksonville Jaguars meet in an inter-conference matchup in NFL action from TIAA Bank Field on Sunday afternoon.

The New Orleans Saints will look to build on their current three game winning streak after a 31-24 win over Tampa Bay in their last outing. Teddy Bridgewater has thrown for 849 yards, 6 touchdowns and 2 interceptions on 70.2% passing while Alvin Kamara leads New Orleans in rushing with 342 rushing yards this season. Michael Thomas leads New Orleans’ receiving group with 45 catches for 543 yards and 3 touchdowns while the aforementioned Kamara is 2nd with 241 receiving yards and Ted Ginn Jr. and Jared Cook each have 100+ receiving yards this season. Defensively, Vonn Bell and Demario Davis are tied with the team lead with 35 total tackles with Davis posting a team-high 27 solo tackles this season. Cameron Jordan, Marcus Davenport and Trey Hendrickson each have a team-high 3 sacks while Marcus Williams has a pair of interceptions this season. As a team, New Orleans is averaging 348.4 yards of total offense and 23 points per game while allowing 363.4 yards of total defense and 23.2 points per game against this season.

The Jacksonville Jaguars will look to bounce back and get back to .500 after falling to 2-3 on the year with a 34-27 loss to the Rams in their last outing. Gardner Minshew II has thrown for 1,279 yards, 9 touchdowns and an interception on 66.7% passing while Leonard Fournette has rushed for a team-high 512 rushing yards and a touchdown. DJ Chark Jr. leads Jacksonville’s receiving corps with 27 catches for 485 yards and 5 touchdowns while Chris Conley has 243 receiving yards and Dede Westbrook has 23 catches for 227 yards this season. Defensively, Ronnie Harrison leads the Jaguars with 35 total tackles while Calais Campbell and Josh Allen each have 3 sacks this season. As a team, Jacksonville is averaging 392.6 yards of total offense and 22.2 points per game while allowing 382 yards of total defense and 23.6 points per game against this season.

New Orleans has been playing well, winning three straight, but all of their four wins have all been fairly close, within a touchdown. On the other side, Jacksonville has played the majority of their games on the road, and their two home games were the season opener against Kansas City and their win against Tennessee. The issue with Jacksonville I have is that side by side, the Saints are the more talented team and have already gone to arguably the toughest road environment in the NFL in Seattle and won outright. I just like what I’ve seen from New Orleans so far and while this line kind of feels like a trap, I’m biting and taking New Orleans and the free points here.