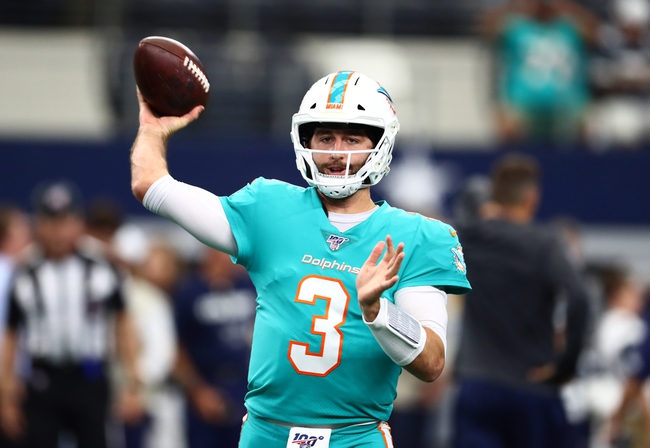 The Miami Dolphins look for a win to prevent their first 0-5 start since the 2011 season. The Miami Dolphins have lost each of their last four home games. Josh Rosen is completing 51.2 percent of his passes for 482 yards, one touchdown and three interceptions. Rosen and Ryan Fitzpatrick has have combined for two touchdowns and seven interceptions this season. Preston Williams and DeVante Parker have combined for 402 receiving yards and two touchdowns while Kenyan Drake has 13 receptions. The Miami Dolphins ground game is averaging 51.8 yards per contest, and Drake leads the way with 113 yards on 31 carries. Defensively, Miami is allowing 40.8 points and 472 yards per game. Jerome Baker leads the Miami Dolphins with 29 tackles, Taco Charlton has two sacks and Bobby McCain has one interception.

The Washington Redskins have split their last 10 games ATS as a road favorite. The Miami Dolphins have failed to cover five of their last seven games as a home underdog. This is an interesting game when you consider that both of these teams are probably hoping to lose so they can improve their odds of landing the first overall pick in the upcoming NFL draft. The Dolphins are probably in much better shape of getting that pick considering they traded away nearly any possible player who could make an impact in winning. However, the Redskins shouldn't be laying points against anyone, especially on the road and after the firing of coach Jay Gruden. The Miami Dolphins are at home and have had an extra week to prepare. So while the Dolphins are more invested in getting that top pick, there's value in getting free points in this forgettable matchup.