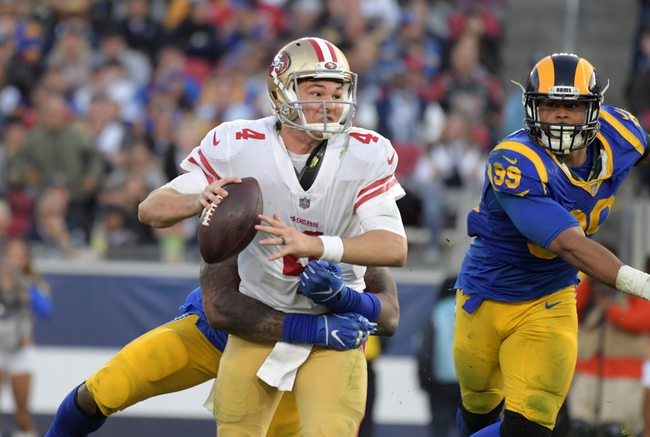 The San Francisco 49ers will look to remain unbeaten, sitting at 4-0 after a 31-3 beatdown of Cleveland in their last outing. Heading into Monday’s action, Jimmy Garoppolo has thrown for 739 yards, 5 touchdowns and 4 interceptions on 69% passing while Matt Breida leads San Fran In rushing with 226 rushing yards and Raheem Mostert has 202 receiving yards as well. George Kittle leads San Fran with 17 catches for 165 yards while Deebo Samuel and Marquise Goodwin each have 100+ receiving yards this season. Defensively, Fred Warner leads San Francisco with 19 total tackles including 14 solo tackles. Heading into Monday, as a team, San Francisco is averaging 427.2 yards of total offense, including the most rushing yards per game with 200 per game as well as the 2nd-highest scoring offense with 31.8 points per game. The 49ers are also allowing 257.5 yards of total defense and 14.2 points per game against this season.

The Los Angeles Rams will look to rebound from back-to-back defeats after a 30-29 loss to Seattle last time out. Jared Goff has thrown for 1,649 yards, 7 touchdowns and 7 interceptions on 63.1% passing while Todd Gurley II has 270 rushing yards with 5 rushing touchdowns and Malcolm Brown has 114 rushing yards and a pair of touchdowns. Cooper Kupp leads L.A.’s receiving group with 41 grabs for 505 yards and 4 touchdowns while Robert Woods and Brandin Cooks have 355 yards and Brandin Cooks has 325 receiving yards. Defensively, John Johnson III leads L.A. with 42 total tackles including 20 solo tackles while Cory Littleton and Eric Weddle each have 41 tackles with Weddle posting a team-high 24 solo tackles. Clay Matthews JR. also has 6 sacks for the Rams defense. As a team, Los Angeles is averaging 413.6 yards of total offense and 29.2 points per game while allowing 350 yards of total defense and 26.8 points per game against this season.

If you had told me before the season that at this point, the 49ers would be in first in the NFC West and the Rams had lost two in a row, I probably wouldn’t have believed you. However, that’s what has happened and the 49ers look like a team that’s serious about a postseason pish. However, the Rams have had some extra time to rest and prepare while San Fran comes into this game on short rest. I just think the Rams can win this one by a touchdown, so I’ll lay the points with the Rams here.