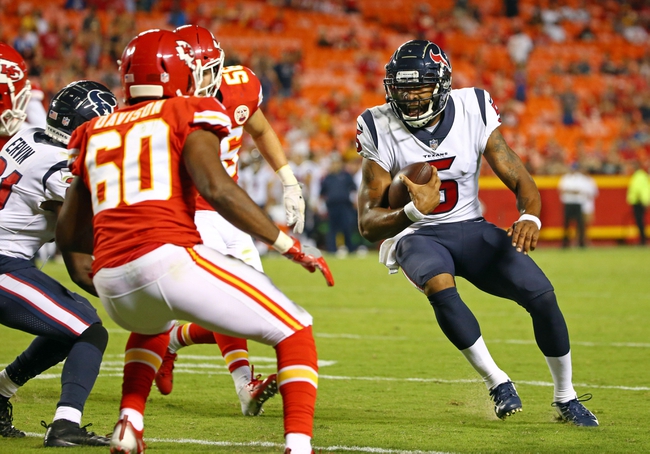 The Houston Texans and the Kansas City Chiefs meet in a week 6 NFL matchup from Arrowhead Stadium on Sunday afternoon.

The Houston Texans will look to build on a 53-32 win over Atlanta in their last outing. Deshaun Watson has thrown for 1,364 yards, 11 touchdowns and an interception on 69.2% passing while Carlos Hyde leads the Texans in rushing with 310 rushing yards and a pair of touchdowns. Will Fuller V leads Houston’s receiving corps with 400 receiving yards and 3 touchdowns while DeAndre Hopkins has a team-high 31 grabs for 347 yards and a pair of touchdowns. Defensively, Benardrick McKinney, Justin Reid and Zach Cunningham are all tied for the team-high with 41 total tackles while Whitney Mercilus has 5 sacks and J.J. Watt is right behind with 4 sacks this season. As a team, Houston is averaging 381.8 yards of total offense and 26.2 points per game while allowing 365.4 yards of total defense and 22 points per game against this season.

The Kansas City Chiefs will look to rebound from their first loss of the season after a 19-13 loss to Indianapolis last time out. Patrick Mahomes has thrown for 1,831 yards and 11 touchdowns on 65.6% passing while LeSean McCoy leads the Chiefs in rushing with 214 rushing yards and a pair of rushing touchdowns. Travis Kelce leads the Chiefs with 439 receiving yards and 28 receptions while Sammy Watkins has 23 grabs for 365 yards and 3 touchdowns and Demarcus Robinson also has 3 receiving TDs with 281 yards on 17 catches. Defensively, Damien Wilson leads the Chiefs with 35 total tackles including a team-high 25 solo tackles while Emmanuel Ogbah has a team-high 2.5 sacks this year. As a team, Kansas City is averaging

Kansas City being favored at home makes a world of sense as Arrowhead is a tough place to go on the road and hang let alone win. However, Patrick Mahomes is dealing with an ankle issue from that loss to the Colts, and while I won’t say it’s going to ruin his game here, I just think it doesn’t help when you have to take on a Texans defense featuring Whitney Mercilus and J.J. Watt that are going to force you to move around and make plays on the move. I think this one is either an outright Texans W or at worst a loss by a field goal, so I’ll take my points with Houston here.