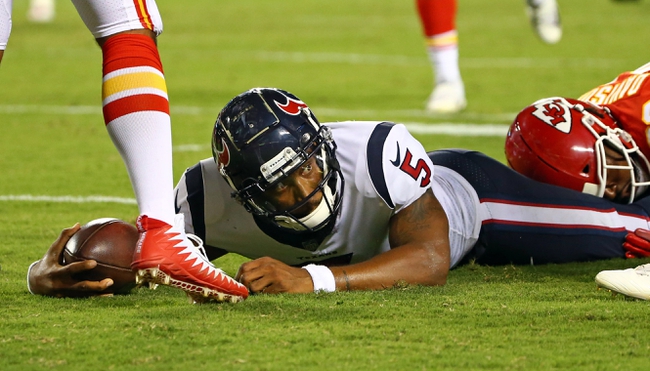 The Houston Texans look for another victory after winning three of their last four games. The Houston Texans have won six of their last eight road games. Deshaun Watson is completing 69.2 percent of his passes for 1,364 yards, 11 touchdowns and one interception. Watson has two or more touchdown passes in eight of his last 14 games. Will Fuller V and DeAndre Hopkins have combined for 747 receiving yards and five touchdowns while Kenny Stills has 11 receptions. The Houston Texans ground game is averaging 129.4 yards per contest, and Carlos Hyde leads the way with 310 yards and two touchdowns. Defensively, Houston is allowing 22 points and 365.4 yards per game. Zach Cunningham leads the Houston Texans with 41 tackles, Whitney Mercilus has five sacks and Tashaun Gipson has one interception.

The Houston Texans are 4-0-1 ATS in their last five games as a rod underdog. The Kansas City Chiefs have failed to cover six of their last nine games as a home favorite. The Texans are starting to play consistent football and have shown they can take their game to another level on the road, as they went toe-to-toe with the Saints in the season opener and beat the Chargers by a touchdown a couple of weeks ago. The Kansas City Chiefs have been shaky the last couple of weeks and enter this game with a banged up Mahomes, while Sammy Watkins and Tyreek Hill remain questionable. In terms of value, I'll take the healthier team and the free points.