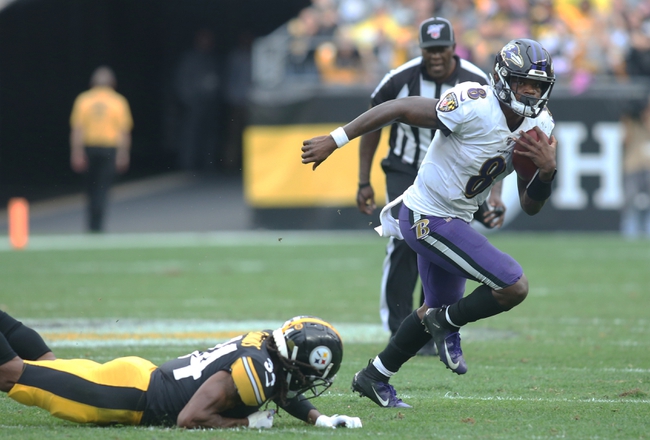 The Cincinnati Bengals and the Baltimore Ravens meet in a week 6 AFC North division tilt in NFL action from M&T Bank Stadium on Sunday afternoon.

The Cincinnati Bengals will be on the hunt for their first win of the year after dropping to 0-5 with a 26-23 loss to Arizona in their last outing. Andy Dalton has thrown for 1,412 yards, 7 touchdowns and 4 interceptions on 63.2% passing while Joe Mixon leads the Bengals in rushing with 242 rushing yards. Tyler Boyd is the Bengals’ top receiver with 406 receiving yards and 37 receptions while John Ross III has 328 receiving yards and 3 touchdowns. Defensively, Shawn Williams leads the Bengals with 43 total tackles including a team-high 31 solo tackles while Sam Hubbard has a team-high 3 sacks this season. As a team, Cincinnati is averaging 319.2 yards of total offense and 16 points per game while allowing 411.8 yards of total defense and 27.2 points per game against this season.

The Baltimore Ravens will look to pad their division lead, currently sitting at 3-2 after a 26-23 overtime win against Pittsburgh last time out. Lamar Jackson has thrown for 1,271 yards, 11 touchdowns and 5 interceptions on 65.4% passing while Mark Ingram II has 372 rushing yards and 6 touchdowns while the aforementioned Lamar Jackson has 308 rushing yards this season. Marquise Brown and Mark Andrews each have 3 receiving touchdowns while Brown adding a team-high 326 receiving yards while Andrews has a team-high 28 receptions for 311 yards. Willie Snead IV also has 205 receiving yards and a pair of touchdowns while Hayden Hurst and Nick Boyle are also 100+ yard receivers for the Ravens this year. Defensively, Patrick Onwuasor leads the Ravens with 29 total tackles including a team-high 23 solo tackles while Matthew Judon and Pernell McPhee each have 3 sacks. As a team, Baltimore is averaging 441.4 yards of total offense and 32.2 points per game while allowing 370.2 yards of total defense and 24.6 points per game against this season.

Laying this many points with Baltimore is a bit intimidating when you consider that the Bengals and Ravens don’t like each other at all, and this game could be a hard-fought, scrappy battle. However, Cincinnati’s best chance at getting in the win column was probably last week against Arizona, and the Bengals just let it get away. Say what you want about the Ravens and their record, but they’re still the highest scoring offense in the league through the first 5 weeks of the season and I just don’t see Cincinnati keeping up here. Give me Baltimore by at least two touchdowns, in which case I’ll lay the points here.