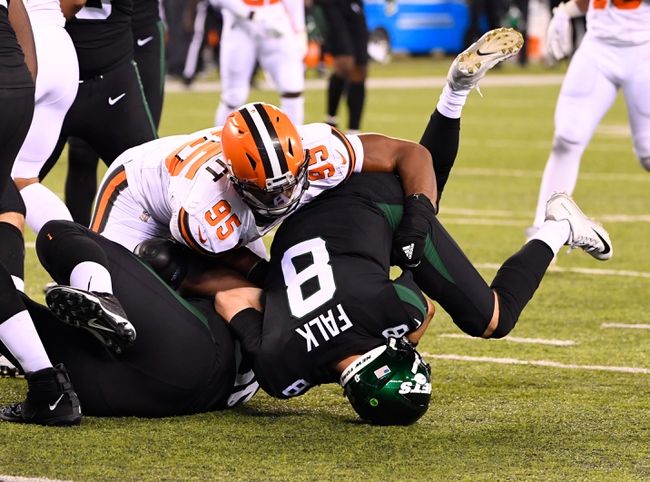 The Cleveland Browns and the San Francisco 49ers meet in a week 5 edition of Monday Night Football in NFL action from Levi’s Stadium.

The Cleveland Browns will look to get back above .500 after improving to 2-2 with a 40-25 win over Baltimore in their last outing. Baker Mayfield has thrown for 1,147 yards, 4 touchdowns and 6 interceptions on 59% passing while Nick Chubb leads the Browns in rushing with 398 rushing yards and 4 touchdowns. Jarvis Landry leads Cleveland’s receiving corps with 328 receiving yards while Odell Beckham Jr. has a team-high 21 catches for 308 yards and a touchdown and Damion Bailey has 103 receiving yards for the Browns this season. Defensively, Joe Schobert leads Cleveland with 44 total tackles including 27 solo tackles while Myles Garrett leads the NFL with 6 sacks and Larry Ogunjobi has 3 sacks as well. As a team, Cleveland is averaging 380.2 yards of total offense and 22.2 points per game while allowing 335 yards of total defense and 22.8 points per game against this season.

The San Francisco 49ers have had an extra week to prepare for this one with their week 4 bye, but are hoping to remain unbeaten, currently sitting at 3-0 with a 24-20 win over Pittsburgh in their last outing. Jimmy Garoppolo has thrown for 739 yards, 5 touchdowns and 4 interceptions on 69% passing while Matt Breida leads the Niners in rushing with 226 rushing yards. Raheem Mostert has 202 rushing yards while Jeff Wilson Jr. has 4 rushing TDs this year. George Kiltle leads San Fran with 17 receptions for 165 yards while Deebo Samuel and Marquise Goodwin are also 100+ yard receivers for San Francisco this year. Defensively, Frew Warned leads San Fran with 19 total tackles including 14 solo tackles while Arik Armstead, Dee Ford and DeForest Buckner each have a pair of sacks this season. As a team, San Francisco is averaging 421 yards of total offense and 32 points per game this season while allowing 283.3 yards of total defense and 18 points per game against this season.

Cleveland has been a Jekyll and Hyde type team, with both of their wins coming on the road and both losses coming at home, and that Baltimore win last week was impressive. However, Cleveland is still an inconsistent team and although there’s some talent there, we’ve yet to see the Browns put it all together consistently. Say what you want about San Francisco, but the fact is that the Niners have been playing well out of the gate and keep finding ways to get the job done. I simply find the 49ers easier to trust right now, so I’ll lay the points with San Francisco on Monday night.